Labor Turning Left on Inequality ; Let’s Make Sure the Policies Match the Rhetoric 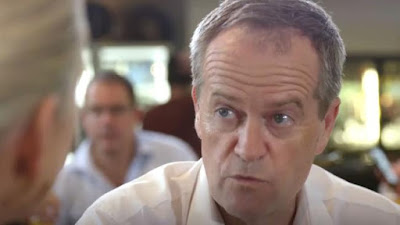 In a very-welcome move, Bill Shorten (above) is talking about Action on Inequality (specifically progressive tax reform) ; Labor Activists need to support this move, while at the same time appraising the associated Policies, and engaging in such a debate as to ensure the Policies match the Rhetoric.

Apparently Federal Labor under Bill Shorten is considering significant reform of Australia’s tax system to bring in potentially billions in new annual revenue, and to address the scourges of disadvantage, inequality and poverty.


But according to ‘Age’ journalist, Peter Martin, additional possible options now being canvassed include:  (‘The Age’ 22/7, p 17)


·         and “ending the diesel fuel rebate” for miners and farmers ; again bringing in perhaps over $4 billion


These would be very-welcome announcements should they eventuate. Though to aspire to an extended social wage and welfare state Labor really needs to be considering ‘in the ballpark’ of 5% of GDP in progressive new annual spending – arrived at over several terms.


And a figure of increasing Federal Government expenditure by 2% of GDP may be appropriate and realistic under a first term Labor government.  (ie: increase progressive tax and associated expenditure by around $32 billion in a $1.6 trillion economy)


We will consider other possibilities to reach that vicinity later in this article.


The Herald-Sun has responded to this recent positioning on distributive justice by Shorten ,  proclaiming that: “Bill Shorten has ratched up his class warfare rhetoric”. For the Herald-Sun instead Labor must cut “wasteful spending”  and not target “so-called” “rich and big business”.   Here inequality is to be considered not a reality. Rather according to the Herald-Sun it is Shorten who is “dividing us” into a “Have and Have-Not nation”.   (Herald-Sun, 22/7, p 12, 38)  There is talk of rewarding and not punishing “aspiration” ; and a rising cost of living is blamed on renewable energy.  (as opposed, for instance, to abuse of market power and inferior cost structures in the wake of privatisation)


But  ‘the Australian’ (22/7, pp 1, 8)  talks itself into a corner while unwittingly providing ammunition to refute the Herald-Sun’s suggestion that ‘inequality is a mirage’ conjured up by Shorten , and is not real.


It quotes labour market economist Professor Robert Wilkins to the effect that inequality has not been “ever rising” since the Global Financial Crisis. (2008)  But then has to concede that the portion of national income going to the top 1 per cent has approximately doubled since the 1970s to over 8 per cent.  Wilkins also interestingly concedes that inequality is “high by modern standards”.

Wilkins also concedes that we do have wage stagnation. And when you add a rising cost of living the reason inequality is becoming a far more urgent and resonant issue is clear.


Further ; ‘The Australian’ observes that Shorten and Bowen are drawing on pre-tax figures on inequality ;  But if anything taxes have long been becoming lower, more broad-based, and less progressive ; at the same time as we have observed a growth in the application of the ‘user pays principle’ for everything from education to water.


So Australia is lagging behind some of the most successful economies in the world in this respect. Despite Ideological claims to the contrary from the Business Council of Australia (‘The Australian’, 22/7/17) and elsewhere, the reality is that ‘bigger government’ can be good for the economy, and even ‘good for business’.


While Labor has recently only been courageous enough to target the very rich with admittedly very-modest reforms, ACOSS observed in a 2015 report that inequality was marked in our supposedly-egalitarian nation.


This gives us some idea of the extent of income and wealth inequality.  Though these statistics may also admittedly be influenced in the context of ‘asset rich, income poor’ households ; those who may own a family home for instance, but who may fall into one of the bottom two quintiles for income.


Also the top 20% wealth and income quintiles may be affected by the weighting of the extremely wealthy.  Again: after all, research quoted by Robert Wilkins in ‘The Australian’ (22/7/17)  has it that the top 1 per cent alone account for over 8 per cent of total wealth in Australia.

Labor needs a nuanced approach: assisting the income poor and the asset poor ; while redistributing from those who are income and asset rich.  Deflating the housing bubble and making home ownership a real prospect for families again is crucial. Labor’s Negative Gearing reforms are essential here.  Expanding public housing is necessary to assist low income families and vulnerable individuals as well: while also boosting supply ; with a ‘flow on effect’ to affordability for everyone.

But that’s not the end of the story.  In short Labor needs to redistribute from a broad enough economic base to fund redistribution via the tax mix, tax-transfer system, social wage and welfare state.  That must mean redistribution from the upper middle class as well as the outrageously wealthy.


Yet tax may need to rise for the ‘middle income’ layers as well.


The rationale for this is as follows.


Tax comprises not merely a burden as if taxpayers received nothing in return.  It is also the means of funding collective consumption and social insurance.  Despite complaints from the banks,  the recently-implemented Federal tax upon them was a way of paying for an effective ‘government guarantee’ – a form of ‘economic insurance’ which originated with the Rudd Labor Government during the Global Financial Crisis of 2008. (GFC)


Morally-speaking, the ‘middle income layers’ should also show some solidarity with those who are struggling.  That’s part of the picture. But by ‘collectively consuming’ infrastructure, services and social insurance they also ensure they get a much better deal for their tax dollar than they would as atomised private consumers. Consider communications, transport, water, energy infrastructure, health and education infrastructure - and the costs of the associated services. And taxes also must be levied so citizens are ‘covered’ in the case of accident, illness, disability, job loss and so on.

Also there is a growing crisis of what some would call ‘corporate welfare’.  Ostensibly in order to be ‘competitive’ in attracting capital we have seen an increasing phenomena of tax payers, workers, citizens – effectively subsidising business. Governments ‘look the other way’ on tax evasion, tax havens, abuse of trusts and so on.  Or ‘talk the talk’ while taking only token action.  (Labor could do with some introspection here as well)


Corporate Taxation falls lower and lower to ‘remain competitive’. A ‘race to the bottom’.  The ultimate consequence of this is that business is no longer paying its fair share for the services and infrastructure it benefits from.  That means workers and other tax  payers have to ‘pick up the tab’.

But as well as being unfair, ironically this ‘comes back around’ to harm certain businesses as well.  Workers and taxpayers therefore have less disposable income , which means less scope for discretionary consumption.  This is why some businesses are beginning to worry about falling wages. Though others remain narrowly self-interested – looking only at their own sectional interests, and for instance supporting attacks on penalty rates.

The other possibility is that crucial services and infrastructure will just be neglected.  But much of that infrastructure and services is a ‘drawcard’ for investment as well.  For instance an educated workforce. ‘Social disintegration’ can also mean added costs in the form of crime, ill health and so on.  This is without even considering the question from the viewpoint of striving for ‘The Good Society’ and not just ‘economic goals in abstract’.


There are other possibilities for tax reform, also, not examined by Martin’s article. Those could be crucial in lifting Australia closer to the examples set by successful economies such as Germany and Finland. We will consider a number of those:


·         further (and genuinely substantial) cuts to superannuation concessions for the unambiguously well-off (the upper middle class and higher); with the potential to save tens of billions a year with that one measure alone


·          Fix the Company Tax rate at 30 per cent and take serious action on corporate tax evasion, use of tax havens etc.


·         Gradually wind back Dividend Imputation (tax credits ostensibly to stop ‘double taxation’ – the rationale of which has weakened with falling Company Tax rates);  That would have the potential to save $5 billion a year from reducing Dividend Imputation to a 75% rate alone in a first term Labor Government ; and much more over time depending on the reaction


·         Raise and restructure the Medicare Levy into a more-progressive multi-tier tax; and index to prevent unfair bracket creep ; Also cover Aged Care costs within the Medicare Levy – and raise enough revenue to eliminate unfair user pays costs for lower income, middle income and working class families , while improving services, and hence improving quality of life and happiness for residents , and those remaining at home.


·         Introduce a progressively-scaled ‘infrastructure levy’ to provide for all manner of infrastructure (transport, communications, energy, water etc) ; and to stem the trend towards privatisation – which is worsening cost structures and arguably fuelling nepotism.


Importantly, though, Labor’s consideration of increasing the top income tax rate by 2 per cent is not substantial enough to make serious inroads into the deficit , provide for social wage and welfare expansion , or to render indexation of the income tax mix sustainable thereafter.  Compared with other taxes, income tax has great progressive and redistributive potential ; and its significant reform must be prioritised to achieve the best outcomes.


It’s encouraging that Labor is considering serious reform of the tax system for fairness.  We need such reform to promote distributive justice, and provide the means for social wage and social security expansion.  But Labor activists need to hold their politicians to a high standard as well.  There is a history of rhetoric on these issues, combined with a failure to match that rhetoric with the necessary action in the 'end analysis'.   Not every measure considered here will be implemented by a first term Shorten government.  But extension of progressive tax and associated social expenditure by 2 per cent of GDP, or $32 billion in a $1.6 Trillion economy, is a very good place to start.