Government does not go far enough on Aged Care reform, while Labor is too-light on the Details 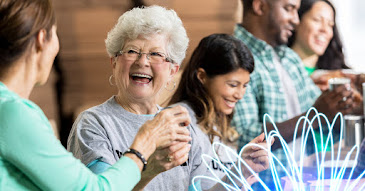 above:  Aged Care residents need  more to do than to be sat in front of a television all day

The recent Budget announcements are a mixed bag for Aged Care.  They represent a step in the right direction ; but much is still left to be done.  Specifically the Budget outlines an extra $17.7 billion over five years in new funding ; but with an upwards trajectory.  This is intended to provide an additional 80,000 home care packages over two years, while increasing the Basic Daily Fee by $10 a day. This will provide for things such as better food.   And average staffing levels will increase, with 200 minutes of personal attention allowed for, with 40 minutes of this with a registered nurse.   By comparison,  the Royal Commission concluded that residents require at least 215 minutes of personalised care a day.  (including 44 minutes with a Registered Nurse)  And while the Budget initiatives will see an increase in the numbers of  Aged Care workers attaining a Certificate III qualification, they have stopped short of mandating this as a minimum standard.

The Conversation concludes that while the changes, including a new Aged Care act in 2023, are significant, they stop short of the ‘needs based’ model demanded by the Royal Commission.   We still need minimum staffing ratios.  Mandated personal time with staff needs to go further.  To attract and keep the best workers we need significantly better wages and conditions for all staff.  A landmark improvement in wages of at least 20 per cent, and end casualisation for those who prefer part time or full time work.  This is also a matter of fairness in relation to the demanding nature of the work.  We require more workers with a Certificate IV minimum.  We need as many workers as possible with a Certificate IV, and none with less than a Certificate III. What’s more we want better standards without falling back on user pays to provide for this.  In Paul Keating’s words, we don’t want people to have to ‘eat their house’ and die broke.   This also requires an improvement in the Aged Pension, with an easing of means tests. And we need to provide for a waiting list of around 100,000 for at home care. We also need stringent regulation to ensure new funding goes entirely towards staff, infrastructure and services, and not profit margins.

There’s also the problem of Aged Care homes being ‘warehouses for old people’. People are just sat down in a common room in front of a television all day.  Tied funding needs to be provided for facilitated interaction ; outings for those interested and capable ; visits, gardens and access to a variety of books and information technology ; as well as interesting and engaging activities.  Once everything is accounted for we’re looking at something more like a minimum of $10 billion new funding every year indexed to account for rising costs and inflation.  This is necessary just to make up for the money withdrawn from the system in the form of ‘efficiency dividends’ over the past 20 years.   The public sector also needs to take more responsibility, with more public investment in aged care facilities.  For profit aged care does not have the interests of residents at heart, and even not-for-profits can be prone to diverting funds for expansion.

But by comparison Labor has made little in the way of monetary commitments in its Budget Reply.  Nonetheless it’s true, Albanese has hinted at ratios.  He argued that :  “a Labor Government will deliver that care by ensuring that every dollar spent in aged care goes to employing a guaranteed minimum level of nurses, assistants and carers and to daily needs like decent food – rather than into the pockets of the more unscrupulous providers.”   This includes a registered nurse on site 24/7.  And a commitment to levels of personalised care recommendation by the Royal Commission. He backs the Royal Commission findings ; though he does not commit in areas where there was disagreement ; such as funding.  Albanese also mentions issues like the wages and conditions of staff, which the Liberals did not even touch upon.   The bottom line is that while Labor is saying some good things, it needs to commit on funding.  And that funding mechanism should be as progressive as possible.  For a start, tax cuts for the well-off need to be stopped or reversed.  It needs to provide at least twice the monetary commitment made by the Conservative Government in Aged Care ; or at least an additional $10 billion a year.  And that funding needs to kick in as a matter of urgency, as soon as possible.

Albanese is also highlighting Labor’s ambitious child care policy, as well as its high tech industry policy, an emphasis on wages, and a big commitment to social housing  - with 20,000 new social housing dwellings,  including 4,000 places for women and families escaping domestic violence.  There is no explanation how wages will be driven upwards however, or why social housing is thought preferable to public housing.  After all, public housing would ultimately be more affordable for recipients. If the Fair Work Commission will not lift Aged Care workers’ wages significantly enough Labor needs to intervene more directly.  And the NDIS needs support so recipients are not adversely affected by cost-cutting.

As the Federal election approaches, the issue of revenue and funding will become unavoidable.  A ‘small target’ will not suffice when people are demanding details. An Aged Care Levy could be progressively structured, and would probably be relatively popular if linked directly with Aged Care funding.   The Coalition has been driven by the findings of the Aged Care Royal Commission to go further than it is probably comfortable with.  But Labor needs to go further still if it is to address the findings of that Commission, and clearly distinguish a superior policy from that of the Coalition.