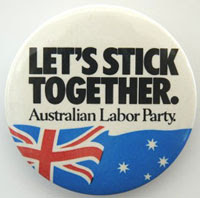 above: With a possible Abbott government looming, Labor needs a clearer sense of where the real threat is coming from; Tristan Ewins argues that Reconciliation is necessary now if there is to be any hope; And robust policy could be the key!

Regarding ongoing leadership speculation in the ALP: What we have witnessed has been a ‘mutual scorched earth policy’ in the party and the caucus. We’ve had some figures (Rudd supporters apparently) leaking constantly to the media; and even accusing Gillard of‘class war rhetoric’. And on the other side we’ve had high profile Ministers besmirching Rudd’s character and saying they would NEVER work under him again. In short it is “mutually assured political destruction’: “political scorched earth”…
The ridiculous and self-destructive ‘class warfare’claims of some have been particularly damaging – as this has acted to discredit the social democratic and labour cause – the ideology and the principle of socially just redistribution and the liberal and social rights of labour…


The bad blood is now SO bad that I despair the party might never heal… What is necessary for hope of healing is to have such a powerful policy agenda that it serves as an irresistible catalyst to re-establish solidarity.
This could involve reform of the mining tax. Regardless of his flaws: even if Rudd does not return to the leadership this could be a kind of ‘vindication’ for posterity. That could create an environment where all parties could ‘move on’ on the basis on conciliation… This could also involve clear and public recognition that he provided strong political leadership in response to the Global Financial Crisis, with the Education Revolution and with the Apology. For this both Rudd and the broader party deserve recognition. Unequivocal recognition of these achievements specifically could do a great deal in achieving healing.
But MOST IMPORTANTLY: Labor needs to revisit the issue of superannuation concessions to fund a strong social wage and social insurance agenda. A progressive agenda of ‘Whitlamite proportions’ could also be a healing influence – with all parties seeing that with so much at stake their consciences would not allow the currently mutual sabotage and ‘scorched earth’ approaches to continue....
What more could all this entail?


Firstly it should involve superannuation concession reform – aimed at building in a progressive and sustainable manner a powerful‘war-chest’ for an ambitious social wage and social insurance agenda. And a reversion to 75% - or perhaps 50% - dividend imputation – could also provide crucial funds.
So precisely which other policies would this war-chest fund? The following are a number of ideas which the author remains passionately committed to.


· National Aged Care Insurance providing for the human rights of all aged Australians; and funding that progressively without driving poor and working class families to sell their only substantial assets for what is inadequate care in any case.


· Extensive Cost of Living Assistance for low income individuals and families including pensioners when it comes to energy, communications, transport, medicine and water. Furthermore: Public energy and water ownership can mean cross-subsidy rather than passing the prices indiscriminately on to consumers. And more federal funding for transport and energy infrastructure could prevent reversion to wasteful and expensive PPPs – or worse, fully private infrastructure.

· A commitment to keep the NBN public over the long term with cross-subsidised services for poor and vulnerable groups.

· Sustained support for Australian manufacturing and the liberal and social rights of labour- including encouragement for high wage, high skill manufacturing


· Welfare reform: especially of Newstart and the Student Allowance. And Revision of eligibility criteria for the Disability Pension – which have become too narrow and which serve to discriminate against genuinely disadvantaged and vulnerable people.


· Tax compensation through restructure of the tax mix for low income Australian workers so that they will not be worse off re: their disposable income ‘living week to week’ when superannuation contributions rise to 12%

· Federal money for public housing to take pressure from the housing market; And provide education funding of the scope originally envisaged in Gonski.

· A rescission of bad and unpopular decisions on university funding and sole parents.


· Further reform of the National Curriculum to promote a liberal education agenda for active and informed citizenship, including ideological and political literacy


· stamp duty relief targeted for low income individuals and families – so they are free to move to cheaper accommodation without having to pay the tax. For some people that could make a real difference.

Indeed, there are probably a host of other possibilities – but depending on the scope of tax and superannuation reform we would be talking an annual war-chest for new initiatives of $10-$25 billion in an economy worth about $1.6 Trillion.

Regarding the leadership: there are substantial numbers of Labor parliamentarians, functionaries and rank and file who probably think that they want to set a precedent. Neither side wants ‘to give in to blackmail’ –but both sides are playing the ‘political scorched earth’ game.

Calls for direct election of the Party Leader could well be a good move for the future – to provide a degree of authority surpassed only by the Conference itself.

Time is of the essence; and the threat of a right-wing neo-Conservative Abbott government far too dire. “Mutually Assured Political Destruction”;“Political Scorched Earth” – it has to stop now.

And more than leadership – regardless of what happens on that front – the key is a policy agenda to unite the party; recognise past wrongs on all sides; and resolve never to repeat those errors again.

(postscript) All that said it's important that yesterday 'The Age' in Melbourne was arguing for Julia Gillard to step down so there can be a change of focus to policy and ideas and away from the leadership. It shouldn't HAVE to be like this. We have been trying to put policies out there for MONTHS which have largely been ignored in the monopoly mass media. (including 'The Age' itself for a while)

So what are our choices? Concerted destabilization during an election campaign and in the face of a prospective Abbott government cannot be rewarded. But there needs to be recognition of past wrongs – and open and emphatic recognition of the earlier place of Rudd in ALP history - re: the GFC, the education revolution and the apology... This could help in restoring peace and good-will. But what if the media won't let the leadership issue go? And what if the destabilisation continues right up to the election in any case?

So what else could work as a 'political circuit breaker' without setting the bad precedent of rewarding systemic destabilisation? As suggested above a more robust policy agenda could provide an answer. (you would think this would win over progressive Left parliamentarians including Cameron and Carr) And some will be considering a ‘third option’of an untested leader to break the impasse. Possibly the destabilisers might be satisfied with the 'precedent' this would set with regards the original 'coup' against Rudd in 2010. But would this be seen as a ‘poison chalice’? And would it create the impression of more instability? Whatever happens – all this needs to be finalised quickly. Labor needs to throw itself into the campaign unreservedly and cannot afford the constant distraction of the leadership as opposed to policy.

Sincere and constructive debate welcome!
Posted by Vaughann722 at 6:32 PM