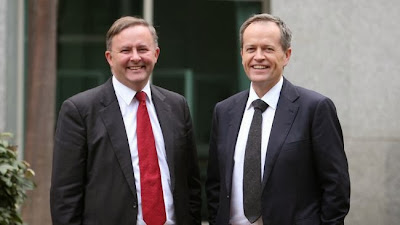 
As the publisher of the ALP Socialist Left Forum blog, and moderator of the associated Facebook group, I believe that this election for the ALP Leadership should be largely about the policy direction the winner will provide for the party. And also it should involve further projected reform of the Party to make it more democratic.


The following questions address those issues of leadership on organisational and policy reform.

At our associated Facebook group we now have almost 600 members. So I’m hoping the ALP Leadership Candidates will see it as being in their interest to answer the following questions for us!


i)                   Australia does not have a presidential system of government. But nonetheless the Party leadership is a position from which a progressive policy agenda can by promoted.  What concrete policy agenda would you pursue if you have the opportunity to promote it as Federal ALP leader?

ii)                 More specifically - to demonstrate your vision for Australia, what concrete agenda would you like to promote as leader in the following policy fields?:

·        tax reform for equity and social wage expansion; including closing down tax loopholes for big corporations and the wealthy

·        Health Services reform: including mental health, and disability services – and how to fund the NDIS over the long term?;  And how to expand public dental – especially for the disadvantaged?

·        Aged Care reform  (specifically including the conditions and career paths for aged care workers; what kind of staff to resident ratios – if any?; what role – if any – for user charges?; how to improve the quality of service?; What about national aged care insurance?)

·        Education (of all levels; and including participation rates; the nature and form of student financial contributions – including equity considerations; and reform of curriculum to promote political literacy and active citizenship)

·        The Environment: what kind of policy to reduce emissions?; how ambitious?; and how to incorporate equity concerns?

·        Promoting media diversification and the cause of robust pluralism more generally

·        The public sector: What role should the public sector play?; and what specific changes would you like to see made in the Australian mixed economy?

·        Economic Democracy – Is there any role for a policy for economic democracy from the ALP today – and what specific measures could we take in government to pursue that principle?

iii)               Ideology and Values: What we don’t hear much of in the ALP today is debate about ideology.  What kind of political ideology would you bring to the leadership; and what kind of ideology – or mix of ideologies – do you think should hold sway in the ALP?

v)                 What is your plan for re-taking federal government for Labor in 2016; and how would you hold Tony Abbott and the Liberals accountable – and limiting the damage -  in the interim?   What kind of role do the different elements of the Party have to play in this process?  (shadow cabinet, caucus, Conference, branches, affiliates, individual members)

vi)               What personal qualities would you bring to the leadership that you think would be of benefit in striving to re-take government in 2016?

vii)             What role do you see Australia as having in world affairs; including the nature of our engagement with our region, and with important powers such as the United States and China?
Posted by Vaughann722 at 4:41 AM