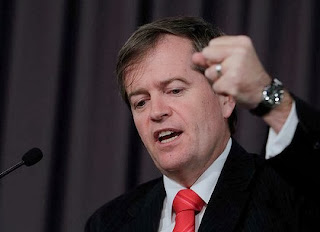 above: The winner of the Opposition Leader election - Bill Shorten


With a 'mixed mandate' from the ALP's first experiment with a rank and file component in electing the parliamentary leader, Bill Shorten needs to move straight away to implement the reforms he promised to 'Local Labor', Race Mathews and others - in order to keep the Party unified and with high morale - as we rebuild and aim to retake government in three years.


With Albanese getting about 60% of the membership vote there's a 'mixed mandate' here. Importantly, I read that the Right was enforcing 'pairing' to ensure their members were voting for Shorten in the caucus. That said, I don't know why some members of the parliamentary Left decided to vote for Shorten. Hopefully the full story will come out in the coming days and we’ll have a fuller appreciation of how this process has panned out….

But we agreed to this process, and this is what we've got to work with. 50% of the vote for the rank and file is still a step forward. Especially if we get more far-reaching reforms as part of the deal over the coming months......


Another matter is that with Albanese recording such a strong vote amongst the members he deserves recognition. There's the option of the Deputy Leadership. Though Shorten has already committed there to Plibersek - and Plibersek is certainly incredibly talented - and could have had a go at the leadership herself if she'd been inclined to do so. Perhaps whoever misses out should receive a shadow ministry of their choice? Though that's complicated by the fact Bowen did a good job as Treasurer.

Albanese overwhelmingly won the rank and file vote on the basis of unequivocal support for direct election to Conference and other reforms. Shorten supported reform too - giving personal guarantees to Race Mathews which were then communicated to the membership and to ‘Local Labor’.

Perhaps Albanese could also be given the job of heading a Committee to oversee democratic Party organisational reform between now and the next Conference. And maybe Conference could be brought forward so that whatever policy positions we adopt - we have plenty of time to campaign on difficult issues which nonetheless are a matter of principle. (for example: increasing Newstart in the face of Conservative attacks)

On the plus side Shorten will make a very articulate leader; But he has to overcome the 'Bill the Knife' tag; He needs to break through against those perceptions early on to stop it from undermining his position.

If we get direct election for National Conference the victory for Party democracy will still be great. (so long as the Parliamentary Party then accepts the policy parameters set by Conference)

In any case – again, it is done now; Bill will be an articulate leader;  Bill Shorten has tried to overcome the ‘Bill the Knife’ tag  today; And I hope he succeeds - for him and for the Party. On the night Shorten supported Rudd he looked like a ghost. I'm certain it was a very difficult decision which weighed heavily on him.

Of great importance:  With such a close vote the pressure needs to be on to implement further internal democratic reform quickly - starting immediately; With such a strong rank and file vote for Albanese Shorten needs to move quickly on democratic reform to keep the party unified at this point and into the future.

A Committee made up of members genuinely committed to democratic reform ahead of the next National Conference – and with a brief to achieve this - would be a the best thing;  So long as it isn’t distorted into a mechanism for ‘burying’ reform rather than implementing it ASAP.

nb: 'Christian Kunde' at Facebook writes:  1 caucus vote = 350 member votes. Albo lost by 700 votes/2 caucus votes. If 3 from the Left voted Shorten, that would have easily been enough"