From Aged Care to Austerity ; Issues of Concern to Progressives as the Federal Budget Approaches 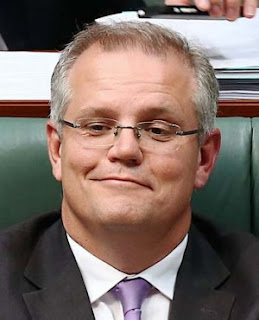 The following letters have been written over the past month ; Most have not been published (except here).  But I hope that here (at my blogs) they will promote reflection and debate.   This time we’re looking at the following:


·        liberal rights and the trashing of Cori Bernadi’s Office


·        The Threat of Austerity in the Upcoming Morrison Federal Budget.


Turnbull’s tougher stance on Superannuation Concessions raises the prospect of it ‘outflanking’ Labor on one front pertaining to distributive justice.  The tax concessions threshold stands to be cut back from incomes of under $300,000/year to those under $180,000/year – compared with Labor’s current target of  under $250,000/year.  (‘The Age’, 20/4)  Malcolm Turnbull has wasted much of the ‘small l liberal kudos’ and political capital he had won after deposing Tony Abbott.  To win the Federal Election, Bill Shorten and Labor cannot afford for him to ‘claw it back’.  As a minimum Shorten must now match Turnbull’s policy.  Even better: he must outbid Turnbull on distributive justice ; and the related theme of Budget repair without Austerity. Indeed Labor should welcome the opportunity for a degree of bipartisanship on an issue where its ‘distributive justice instincts’ were already demanding a stronger policy. Richard Denniss of The Australia Institute has projected that Superannuation Concessions will soon cost taxpayers  $50 billion every year : mainly in the form of an effective subsidy for the unambiguously well-off.  (paid by the rest of us)   A responsible policy would aim to cut this expense by half as a minimum; targeting the well-off specifically; and done as soon as is humanly possible.

Andrew Bolt was wrong on liberal rights re: trashing of Cori Bernadi’s Office

Andrew Bolt  (Herald-Sun, 21/3) condemns “leftists” and “socialists” for the trashing of Liberal MP Cory Bernadi’s office.  And indeed the tactics of those people were questionable at best.  In a picket line there is a clear physical objective – which can interfere with the profits of a private business – and thus deliver leverage to workers over wages and conditions.  Similarly boycotts of the goods of a country or a specific company can achieve leverage in a comparable way.   But the protestors against Bernadi achieved no leverage over government policy through their actions.  And while Andrew Bolt often agitates for free speech, he appears to have nothing to say about Mike Baird’s repressive anti-protest laws.   The problem with mistaken protest strategies can be that they play into the hands of the illiberal forces (ironically in the Liberal Party) who are now threatening our civil liberties.  A truly liberal and democratic society not only supports free speech – but also defends the right to protest, and even the right to engage in civil disobedience. Those rights are now under threat – and whereas Bernadi abhors ‘Leftist totalitarians’ the real threat to our rights comes from within his own party.


Labor MP Andrew Leigh  (21/3)  rightly argued that increasing supply is the key to making housing affordable for more Australians.   Labor’s anti-Negative Gearing policies should encourage a shift to building new properties – hence helping to facilitate that crucial objective. But if we really want to increase supply we need to look at many billions invested in non-clustered public and social housing.  To provide for those people thus enabled to enter the housing market we also need to invest in the amenities and infrastructure provided in emerging suburbs.  Young families need transport and communications infrastructure, hospitals and schools, parks and gardens – to achieve the living standards they need and deserve.   But this is only possible via a significant public investment .   That goes against the grain of the Turnbull Government’s emphasis on cutting expenditure – which sabotages the Commonwealth’s revenue base - and hence its ability to provide for these things.  Company Tax cuts (read: corporate welfare)  are the last thing this country needs to provide for skills, infrastructure, social capital – all necessary for a successful economy and society.

Neglect of the Mentally Ill “A kind of Creeping euthanasia”; a Response to ‘The Age’


Catherine Armitage of ‘The Age’(‘A kind of creeping euthanasia’, 11/4/16)   is to be commended on her article exposing the rate at which mentally-ill Australians are dying well before their time.  That is, that the mentally ill (almost half a million Australians with a serious mental illness)  are on average dying 30 per cent earlier than other Australians – not just because of suicide, but mainly because of preventable physical illness.  That is, 9000 Australians dying as a consequence every year. This far outstrips the road toll and suicide rate combined several times over.  With the Federal Election now looming it is to be hoped that this will develop into an ongoing campaign in the Australian media, including in ‘The Age’: a campaign which will not relent until there are comprehensive and fully-funded government programs to ‘Close the Gap’ on life expectancy for the mentally ill, much as there are programs to ‘Close the Gap’ for Indigenous Australia.

Responding to Morrison:  Austerity not the Answer!


Apparently Scott Morrison is under pressure to cut spending in the upcoming Federal Budget rather than raise taxes. (Herald-Sun, 17/4, ‘p 11)  What some people don’t understand, though, it that there is no ‘magic pudding’, and that cuts to health, education, infrastructure and welfare will have enormous ramifications.  Without increasing progressive taxation – which takes more from the rich than the poor – then there are two possible consequences.  Either the quality of services and infrastructure: like broadband, roads, health, education, aged care  – will suffer.  Or there will be privatisation and/or user pays.  There will be more $100,000 degrees.  State schools will suffer – as will our skilled workforce and economy.  And Australia will continue to lag behind in the quality of its broadband.  The problem with this is that ‘collective consumption’ through taxes can actually give voters a ‘better deal’ in their capacity as tax payers than as isolated private  consumers. Medicare demonstrates this.   But the Liberals have an Ideological fixation on ‘ever smaller government’ which defies practicality and common sense.  Supposed Christians like Abbott and Bernadi also ignore an older tradition of Christian Democracy which had no issue with a mixed economy and a ‘fair welfare state’.


We need a strong response on Aged Care ; This needs to be made a top issue in the impending Federal Election

Sarah Russell (The Age, ‘We’re ignoring the needs of our ageing population’, 17/4) draws attention to the under-funding of Aged Care : quality of training, staff pay,  conditions, morale, and numbers of staff on premises.  The result is poor service regarding turning in beds, assistance with eating, dressing and showering.  But the problems with Aged Care and Rights go deeper.  Those in residential care often simply don’t have anything to do but stare at TV and walls all day.  Similarly those ‘ageing in place’ (at home) can be lonely, socially isolated, and bereft of meaning in life. Hence appallingly high levels of suicide amongst the aged. (especially men)  A common response is for policy makers to throw their hands in the air at ‘the ageing of our population’.  But the current  Aged Care budget  is $17 billion out of a $1.6 Billion economy – or approximately one per cent.  An indexed annual $5 billion/year boost could make a big difference: providing programs for social engagement, purpose, entertainment and mental stimulation, moving away from ‘user pays’, increasing pensions, and providing skilled staff numbers which are desperately needed. – We need an ongoing campaign to make this a top priority in the upcoming Federal election.
Posted by Vaughann722 at 5:53 PM