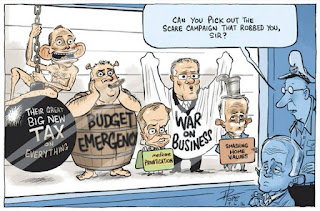 Much has been made of the so-called Labor 'Medi-scare' Campaign.  But reflection suggests Turnbull has only himself to blame for pandering to the 'big 'C' Conservative' wing of his Party - with the profound disillusionment from liberal-minded voters who were originally so encouraged by the departure of Abbott.  For the same reason 'a return to Abbott' is not the answer for the Liberals. In the end the Liberals did not 'tack to the Centre' after all.  And if the Liberal Party swings Right chasing after the votes of the Hansonites that will only provoke further disillusionment from the 'liberal relative Centre' voter demographic.

With the cliff-hanger/apparent-Liberal victory in the 2016 Australian Federal Election there have been calls from Conservative quarters for the removal of Malcolm Turnbull.  The argument goes something along the lines that because Turnbull abandoned the Liberal base he was punished accordingly.  And that a more decisive Liberal victory would have been possible under Tony Abbott.


Certainly the cross-benches will likely be volatile.  The Government could expect to be put into difficult positions on gambling regulation (Xenophon), law reform and legal euthanasia (Hinch), protectionism (Katter), and totally-unworkable policy objectives based on xenophobia. (Hanson)   Cathy McGowan will probably tend towards to the liberal Centre.  Lambie can be unpredictable – but also in some ways progressive on the economy. (take her support for a financial transactions tax)  She also opposes Same Sex Marriage.


The Greens will quite possibly enter into negotiations with the Nick Xenophon Team to link their agendas in the context of balance of power in the Senate. The hope is that they will oppose austerity and regressive re-casting of the tax mix – leaving fair tax reform as the only remaining option for budget repair.  (though some are saying the Conservatives may respond with a new election)  But the Greens have failed to pick up new Lower House seats from Labor.   In the Lower House Wilkie can be depended upon to be critical, consistent and progressive – as past experience shows.

Already there are arguments to the effect that a hung parliament threatens Australia’s AAA Credit Rating.  The arguments can be summed up in that the various sectional interests will get in the way of ‘hard headed action on budget cuts’.  Though again: few are considering the genuinely-existing alternative of budget repair without austerity – on the basis of progressive tax reform.   Budget cuts also threaten the infrastructure and services the economy craves: resulting in something of a ‘false-economy’.  If possible Labor needs to link-up with Xenophon and the Greens in the Senate to progress the agenda of budget repair without austerity.


Those Liberals who aren’t braying for Turnbull’s blood are indignant about the so-called ‘Medi-scare’ from Labor.   Yet the reality is that the fear out there in the electorate goes back to the 2014 Hockey Budget ; with its various Medicare co-payments, and other ‘cuts to the bone’.  Labor’s efforts here were nowhere near as objectionable, say, compared with the Howard-Era Liberal government’s ‘children overboard’ panic,  or more recent talk of a ‘war on business’; and so on.  In fact Labor’s interpretation of Medicare privatisation is entirely reasonable if realised as opposition to the winding back of socialised medicine in this country. That the Federal Police are being deployed apparently as a Liberal political asset is perhaps a threat to our democracy.


Turnbull’s alleged ‘Centrism’ is not the cause of the ‘political-near-death’ of the Federal Liberal Government. Turnbull had extensively compromised in order to keep the big ‘C’ Conservatives within the so-called ‘big house’ that is the Liberal Party.  He compromised on same sex marriage ; and on climate change and refugees.  He made billions in inhumane and profoundly regressive cuts in areas like Aged Care.  As opposed to the line being drummed up by Andrew Bolt and other arch-Conservatives : if anything it was sheer disappointment from the ‘small ‘l’ liberal’ demographic in the broader electorate that resulted in the hung parliament.


Talk now of a ‘new Conservative movement’ – and hints from Bernadi of a ‘new Conservative Party’ illustrate a bitterness within the Liberal Party that goes back to the palace-coup against Abbott.  Regardless of this –any new Conservative movement will need to navigate the contradictions between Liberalism and Conservatism.  For self-espoused Christians heartless LNP policies on defunding an Aged Care sector already characterised by regressive user-pays mechanisms - need to be rejected utterly. Hence ‘Compassionate Conservatives’ have cause to oppose ‘Austrian School-style small government’ and its human consequences.  While small ‘l’ liberals have cause to fear regressive Conservative encroachments on civil and even industrial liberties.  Perhaps the Liberals could even learn from the example of the post-war (1950s) German Christian Democrats and their aim of 'a social market economy'.


By tearing themselves apart the various LNP Liberals and Conservatives may well prove themselves unready for government.  But would a Liberal Party freed from its right-wing once again embody the spirit, say, of Don Chipp; of the later Fraser ; or even the critical disposition embodied by internal critics such as former Liberal leader John Hewson?  Would it become a ‘small ‘l’ liberal party?  Could the Liberal ‘Wet’ faction re-emerge somehow from oblivion?  Or would the LNP  still adhere to ‘large ‘L’ economic Liberalism – leaving dominant narratives of austerity, privatisation and laissez faire untouched?   Turnbull’s capitulation to the ‘big ‘C’ Conservative’ right-wing of his Party during the campaign suggests the latter scenario is more likely.  As they do tend to embrace 'big 'L' economic Liberalism as opposed to 'small 'l' liberalism'.

There was talk under Turnbull of the Liberals ‘shifting to the Centre’.  But remember that the Centre is always relative ; and what matters most is the substance which prevails beneath the relative labels.  Moves amongst parts of Australia’s ‘liberal establishment’ (eg: in Fairfax) suggests all-too-ready a willingness to ‘settle’ with the Liberalism of Turnbull ; even when much of it proved to be compromised and hollow.


The real problem with the Turnbull campaign was its shallowness.  That is, the shallowness of mantras of ‘jobs and growth’, and the incredibility of the notion $50 billion in Company Tax cuts  (and even more over time) would ‘trickle-down’ to benefit everyone.  And this at the same time as the government proclaimed a ‘Budget Emergency’.  This was not small ‘l’ liberalism. It was the spirit of Reagan and Thatcher.


It wasn’t political and social liberalism that ‘did Turnbull in’ with a ‘near-political-death experience’.   It was laissez faire : with the LNP apparently having learned nothing from the overwhelming public rejection of the attempted hard-line Hockey Austerity Budget of 2014.


(Postscript: A friend in the Labor Party cautioned me that an open split in the Liberal Party could have bad ramifications long term. He argued that at least the LNP is not radically nationalist and openly accepting of racist Ideology. And who knows what might fill any vacuum? Though I still think LNP members need to reflect seriously upon two policy fronts : The incompatibility of heartless neo-liberalism and attacks upon the vulnerable with the 'compassionate conservatism' some Christians would like to profess ; and the infringements upon civil liberties arising from 'Big 'C' Conservatism' in this country. We need the Liberal Party (and hence the whole relative political milieu in Australia) transformed as a consequence of pressures on both these fronts.)


Our next post will consider the dilemmas facing Labor following the election outcome.
Posted by Vaughann722 at 8:01 PM