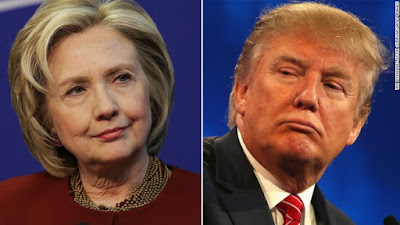 above:  The Economic Policy Contest between Clinton and Trump is more interesting than a first glance may suggest


This week I begin my blog post with a correction.  In an earlier article I described Donald Trump as ‘a neo-liberal’.  Based on corporate welfare policies – such as cutting corporate tax by more than half , as well as cutting other taxes affecting corporations  – this may have appeared accurate.  But upon closer inspection this election is more interesting than it first appears.

Yes, Trump wants to hold minimum wages down to the existing miserly rate of $7.25 an hour.  Yet Democrats are campaigning for an increase to $15 an hour. For the American working poor this could prove to be a real watershed.  Though Clinton has only absolutely committed to a rise to $12/hour she will be under significant moral and political pressure to go further.  That could result in a defining moment for social justice in the workplace at ‘at the lower end’ in America.  But the centre-piece of Trump’s economic policy is a reversion to protectionist policies.  Hence Trump's position is NOT 'neo-liberalism as usual'. He has talked about a 25% tariff on Chinese goods and a 35% tariff on Mexican goods.    The immediate effect of this may well be to shore up some American jobs ; but there’s the prospect of economic retaliation as well.  If that happens it could hurt everyone.


Trump is assuming massive growth in jobs and investment – and that revenue from tariffs will pay for the massive tax cuts ; as well, perhaps, as reductions in some military expenditure – pressuring NATO allies, and East Asian allies such as Japan and South Korea to invest more into their own defence.  Hence Australian commentators such as Paul Kelly suggest (I paraphrase here)  a ‘US withdrawal from the world stage’ , and the end of the US as ‘world’s policeman’, ‘enforcing a liberal political model’, including in our region.  (though In reality the US was often concerned with its diplomatic and economic hegemony more-so than ‘enforcing liberalism’)  Conservative commentators such as Greg Sheridan fear US partial withdrawal from the region and what it might mean for Australia.  (eg: pressures to increase our Defence budget)


Other authors are also pointing to the malaise amongst layers of the US working class – still scarred by the process of deindustrialisation which took effect from the 1970s to the 1980s and 1990s.  Authors observe the loss of certainty and security.  Often there have been much lower wages.  Losses of health benefits.  Loss of respect, working class identity, organisation and social networks.  And where the US Democrats have increasingly pitched their message to ‘the middle’ , working class Americans are sometimes left to wonder ‘if they really matter anymore’.  Many modern middle class liberals have a lot to say about the privileges of being white and male, but have had little to say about the working class ; or about class more generally.   These ‘blind-spots’ have left many working class Americans disoriented ; and at least Trump was speaking to their experiences, fears and insecurities.  Even if his ‘solutions’ are dubious.  Sometimes working class Americans even feel patronised by a ‘middle class liberal establishment’ which hasn’t taken class seriously enough ; which sometimes have disrespected or misunderstood them, or subjected them to caricature.


On the other hand Clinton’s policies do offer more social mobility through greater access to tertiary education.  And while she won’t restore the industrial working class jobs which many look back to as representing a kind of ‘heyday’ ; some working poor Americans could see  close to a doubling of their hourly wages rate.   Some jobs might go ; but others will be created by the increase in consumption power.  Clinton has some good economic policies – obscured by the never-ending mud-slinging ; the constant emphasis on ‘dirt’ and ‘denigration of character’.  (which has become the defining feature of the campaign for both sides)

That said Clinton needed to do more and say more to win over great swathes of working class America.

US industrial working class music icon, Bruce Springsteen has called Trump a ‘conman’ with ‘glib’ and ‘superficial’ ‘answers’ to a problem which has spanned over several decades.  Massive tariffs on China and Mexico are a very blunt instrument.  Again, they may provoke retaliation which ends up hurting everyone.  What jobs are created will possibly pale in comparison to the collapse in corporate tax revenue , with a loss of public sector jobs.


But a more nuanced industry policy – such as the Nordics have experimented with over the decades - should not be considered ‘out of the question’.   Furthermore: The age of retirement must not rise – either in America or in Australia – in order to buoy the economy.  That’s the wrong approach – which depresses rather than improves real living standards. (ie: with a ‘work/life balance’)  Neither should labour market deregulation aim to ‘clear the labour market’.

The US government needs a PLAN for a far more balanced and equitable labour market and economy.   Clinton’s increase in the minimum wage is a good start ; as are her plans for accessible education and greater economic and social mobility.  But depressed regions cannot just be left ‘to carry the can’.  Durable jobs need to be created and maintained over the long term.  And communities need to be reinforced around the necessary social infrastructure.   Where the loss of well-paying working class jobs in manufacturing and heavy industry saw the loss of private sector benefits in areas like health – the State needs to step in and fill the gap.  The social wage is potentially the answer for both middle income and lower income Americans.   And the working class needs to return to ‘the front and centre’ of Democrats policy and rhetoric.

The real danger now is that Trump is gathering enough momentum to deny the Democrats control of BOTH Houses ; ie: the House of Representatives AND the US Senate.  SOME of the truly progressive policies emanating from Hillary Clinton have been derived from Bernie Sanders ; and enshrined in the Democratic Platform.  With control of both houses and massive political and moral pressure to implement that platform – we could see some truly meaningful gains under a Clinton Presidency.  But failure to speak to the fears and insecurities of the US working class – including recognition of the dignity of labour – have undermined the Democrats position ; and left these people exposed to Trump’s demagogic posturing on the home front.

Even on parts of the Left some are also fearful that Clinton may prove to be too ‘Hawkish’ on the foreign policy front.  Trump is seen by some as ‘the lesser evil’.   Julian Assange will likely never forgive the US Administration’s pursuit of him under Obama.  L.B.Johnson implemented ground-breaking ‘Great Society’ social and welfare policies – but will be remembered by most as pursuing the war in Vietnam.  We need a United States which doesn’t just ‘roll over’ in the face of aggression.   But which at the same time goes to extraordinary lengths to maintain peace as well.  And which appreciates the concerns of other Great Powers where they are legitimate.  Yet a vacuum from any US withdrawal within our own region could create more instability, not less.  (though no I am not making excuses for past US policies, such as support for the Suharto regime)

The US Presidential Election is almost upon us.  Let’s hope for a Clinton victory.  But also for a reformed Democratic Party which speaks to – and shows clear respect for – the United States’ working class.