Is it OK for a man to disagree with specific claims of some Feminists? 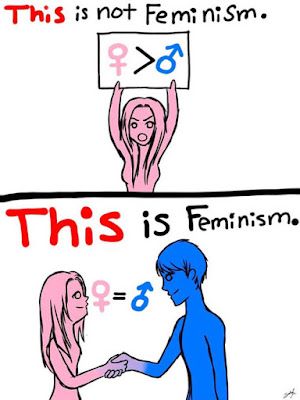 nb:  re: the above ; To be accurate the are many interpretations of feminism just as there are many interpretations of socialism ;  But I would like to think a feminism which sees equality and mutual respect as its aim will prevail ;  I don't intend to write about gender all the time ; But I've been thinking on these issues for a while and would appreciate some respectful discussion

If feminism was defined today as the pursuit of equality in the home, in public life, in sport, in popular culture, and in the labour market then personally I would undoubtedly support feminism.  (and in so far as this is true, I DO support feminism) In addition to that I would agree that going back millennia most societies have involved an exploitative mode of production (currently it is manifest with capitalism) ; but that nested within this (or maybe intersecting with that) there was also a regime of patriarchy. Where women were seen as ‘the second sex’ ; treated at times as property ; restricted in their aspirations ; socialised to be ‘submissive’,  and more recently ‘disciplined’ under capitalism by the separation of the labour market from unpaid domestic labour ; and with the exploitation of that domestic labour.  (ie: as part of the sexual division of labour) I would also agree that men benefited from that gender regime at various levels.

Arguably we’re in the midst of a feminist revolution across the ‘Western’ world. This is reflected in popular culture with a plethora of strong women characters in everything from Star Wars to DC Comics inspired TV series.  The ‘Male Gaze’ is also increasingly challenged with the representation of women’s perspectives. Affirmative action is challenging male ascendancy in public life – with systems of quotas and growing acceptance of women in high office.  Also there is growing popular impatience with the failure of Conservative parties to ‘come into the 21st century’ with regard the promotion of talented women.  In Australia women are making inroads into sports traditionally seen as male dominated. Australian Rules, Rugby, Soccer, Cricket and so on.  Corporate Australia is not ‘catching up’ ; but in any case we should be more interested with how ordinary women and men lead their lives than with the ambitions of ‘the one per cent’ – regardless of whether we are talking of women or men.

With regard this ‘forward march’ I am overwhelmingly sympathetic.  But as with most revolutions there are sometimes elements which take things too far.  The goal of liberation sometimes gets mixed up with desire for revenge, or to turn the old arrangements on their head.  Or just to gain an advantage.

What do I mean specifically?   I’ll provide a number of examples , and hope readers will bear with me.
Firstly ; sometimes analytical concepts are applied inappropriately to silence political rivals.  The term ‘man-splaining’ has been widely popularised, and refers to the tendency amongst some men to ‘condescend’ to women on account of their gender.  This is a genuine problem. But the term can also be misdirected so that in any debate a man disagreeing with a woman might be labelled in this way ; and not merely silenced, but judged harshly at a moral level as well.  And what if on a specific occasion a man is well-informed in that context? The consequence is sometimes men becoming relatively passive in the face of the threat of moral judgement and the stigma that goes with it.  This is not a ‘general problem with feminism’.  It is just to say there is the temptation for some to misuse such concepts for short-term or tactical advantage.   Although there are probably some (by no means all) feminists who would like to reconstruct masculinity in a way which is subordinate ; for those concerned with equality there is  still the imperative of rolling back the institutions of ‘structural’ economic and cultural gender disadvantage.  This is still overwhelmingly a question of women’s liberation from patriarchy. But also there is a concern that long-term we not replace the tyranny of patriarchy with a different kind of tyranny.  Where men know they cannot get away with habitually speaking over women, it is good to have that consideration ; But that must translate as mutual consideration.

Also there is sometimes a blurring of the lines as to what comprises abuse or harassment. Increasingly the act of a man looking at a woman where that attention is unwanted is endowed with the gravity of sexual harassment.  In response, most people – men or women – could probably agree that they have received unwanted sexual attention.  Indeed ‘no means no’ ; and persistently staring at a person can cause discomfort.  But ‘where to draw the line?’ ; and ‘what are the power relations’ underscoring this problem?  Men and women are generally attracted to one another, or same-sex-attracted. This is a natural given.  And often they express this (visual) attraction by looking at each other.  Here it is good to have such emotional intelligence to pick up on visual cues (like body language) ; and to try and not cause discomfort.  But this issue intersects with questions of body image, appearance and self-confidence.  Of course many of us enjoy the attention of those we also find attractive ; but tend to discourage attention from those we do not find attractive.  So all this has consequences for those facing social disadvantage  because of dominant perceptions of ‘beauty’ and ‘attractiveness’ ; where some people may feel relaxed expressing sexual attraction ; but others may retreat into themselves ; and avoid demonstrating attraction for others.  It is compounded by unreal body image expectations ; and it is contestable that increasingly expectations for men are the most unrealistic.  (mesomorphic, muscular, athletic, ‘six pack’ and so on)   The question is: How do we provide the right social cues without emotionally crushing a person who is attracted to us ; but who we are not attracted to in return?    Here we must again be careful not to have double standards.  ‘Power’ can be subtle ; and it is not just a ‘uni-directional’ question of male dominance and privilege.  Finally, to have such a broad definition of sexual harassment probably distracts from the gravity of more serious harassment. Hence when measuring the prevalence of that kind of behaviour we need a transparent methodology.
Continuing ; while Affirmative Action is justified in order to challenge ‘ground in exclusion of women’ in public life, what should be contested is the specific model of affirmative action ,  and how far it seeks to go. If affirmative action seeks a ‘minimum 50 per cent’ women’s representation that could turn into a fixed structural advantage. To be fair, therefore, a ‘40/40/20’ model is probably more realistically accommodating.  Also perhaps it makes more sense to reserve specific seats for women so as to reach the 40/40/20 target.  This is better than to have Affirmative Action leading to a situation where a person gaining a majority does not get the job ; and therefore where voters in democratic organisations do not get the policies which they voted for.  Here democracy should be the ascendant regime. But there is even the danger of affirmative action sometimes being manipulated so as to ‘bypass’ the principle of modern democracy – where one person equals one vote.  Reserved seats for women would over-come this problem while also promoting equality in public life.

It is also interesting to observe that gender tends to be privileged, here, over, say, disability, body type, social class, cultural identity and so on.  As the feminist revolution consolidates there is the question of whether it will satisfy itself with women’s liberation.  Or will it only be satisfied with turning patriarchy on its head?  To expand: Class relations can (at least theoretically) be abolished under a regime of mutual liberation.  Theoretically capitalists can cease to be AS CAPITALISTS ; that is following some theoretical expropriation ; with the abolition of the social relation of capital to labour.  The social relation can be undone without destroying the people concerned as human beings.  But ‘men are men’ (biologically AND according to social-construction) , and any settlement needs to take account of that.  We can get rid of patriarchal social relations but the question of men’s social position and the construction of 'masculinity' will remain.  Equality, mutual consideration, mutual respect – needs to be the aim.
Also, will the feminist revolution be the prelude to a much broader liberation struggle? Or will its proponents be satisfied once they have achieved their own distinct ends?   The allies of women’s liberation should be agitating at this point to broaden the struggle on a multitude of fronts.  The privilege, dominance and power of the capitalist class is ‘the hardest nut to crack’ ; but must be prioritised ; not left in ‘the too-hard basket’.
In some areas there is even arising the scenario of systemic male disadvantage. For instance when it comes to participation levels of men in higher education, and the performance of boys in secondary education. Were it the other way around there would be no patience for this.  But instead there is the spectre of a new ‘gender essentialism’.   There is always the old argument of ‘nature versus nurture’.  And where as I have tended to see nurture as the dominant influence, there is the problem of explaining falling male academic performance.  I struggle with this philosophically. Also, I disagree fundamentally with Education Commentator Kevin Donnelly when it comes to his Ideology, and with his prescriptions for ‘educational reform’ ; but the figures regarding boy’s educational performance speak for themselves.  This needs to be taken seriously as a social problem ; as a site of structural inequality.

Finally: what about ‘men’s rights’?  Mostly on the Left we would summarily dismiss ‘men’s rights’. After all – MRAs are all misogynists, right?  But just consider what’s going on here for a second.  The proposition that men have rights as men is also being rendered marginal by this characterisation of an extreme and hateful social movement.  But 30 years ago people were saying the same kind of thing about feminism.  There may be ‘really-existing’ men’s rights activists who are truly appalling human beings. Who want to ‘turn the clock back’ – and worse.  But what we should not be doing is invalidating the notion that ‘men have rights as men’ just as ‘women have rights as women’ ; but even more so – human beings have rights as human beings.   We have to be open to the notion that a ‘men’s rights’ movement is possible which is an ally – and not the enemy – of a feminism which seeks liberation, and equality in public life, sport, the labour market, the home, popular culture and so on.  A men’s rights movement is possible – which seeks mutual liberation and mutual respect.  But individuals in such a movement may have occasional disagreements or reservations with specific expressions of feminism.  (Such as I have raised here) That does not deserve to be lumped in the same basket with the proponents of gender hate and revenge – as exemplified by the MRAs we always hear about.  And people of a broadly sympathetic kind of thinking (towards feminism), but potentially with specific differences, do not deserve to be vilified.

I hope readers will take the concerns I raise here seriously.  As a person sympathetic towards Feminism ; but who has some differences with some of its specific expressions.  It is well for women to continue making gains: in popular culture, public life, work, sport and in the home.  But let’s be guided by principles of mutual consideration and respect as this transition continues.
Posted by Vaughann722 at 7:15 PM