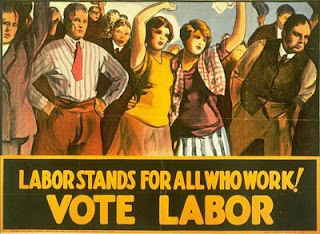 by Dr Tristan Ewins ; ALP member of over 20 years

In 1998 radical American Leftist intellectual, Noam Chomsky made the telling observation that:

“The smart way to keep people passive and obedient is to strictly limit the spectrum of acceptable opinion, but allow very lively debate within that spectrum....”

Another name for this phenomenon is ‘Convergence Politics’.

In Australia there is ‘Convergence’ on the economy, with debates focusing on relatively minor differences ; but where heated debate on the so-called ‘Culture Wars’ fills the vacuum.

Every day in the mass media we are subjected to the positions of ostensibly “Centre Right” and “Centre Left” political parties.  But in reality the ‘relative centre’ has shifted way-right on the economy since the 1970s.  And dissent against that orthodoxy is minimal. Where it occurs it is modest.

The Hawke-Keating years saw convergence on ‘economic neo-liberalism’  in Australia – and there has been no significant turning back since.  Kevin Rudd attempted a Mining Super Profits Tax but was quickly ‘disciplined’ by the mining industry, and removed in short order with a ‘palace coup’.  For a time Sam Dastyari focused attention on corporate tax evasion.  But while corporate tax evasion arguably costs the Australian people tens of billions annually, in reality Dastyari’s proposals were minimal. (in the hundreds of millions)  Julia Gillard delivered a National Disability Insurance Scheme, but it was argued that  ‘savings’ had to be made elsewhere to compensate; the  logic of which was thereafter embraced more enthusiastically by the Liberals.


Under Bill Shorten Labor has committed to reforming Superannuation Tax Concessions, making some cuts in the applicability of Negative Gearing, and reforming Capital Gains Tax Concessions. ‘The Guardian’ argued in 2016 that these measures would save $100 billion over ten years.  This is substantial in the relative scheme of things ; but less impressive when you consider inflation.  Perhaps after that is factored in we’re talking about around 0.5% of GDP in a $1.6 trillion economy.


Shorten received a lot of Kudos from the Australian liberal left (for instance Fairfax journalists) for these ‘bold’ policies. But the fact these measures are considered so remarkable only underscores the reality of ‘Convergence Politics’ in Australia on the economy.

Meanwhile vigorous debate rages in the context of ‘The Culture Wars’. The Equal Marriage debate has been won.  But at a cost whereby Australia’s economic and cultural Right-wing are attempting to claim substantial Christian strata as a ‘base’.  (But this should not be taken for granted; it should be fought ; socially-conservative should not necessarily mean economically-conservative  or economically-Liberal ; nor should ‘Christian’ necessarily mean ‘socially conservative’)


And now debate turns to the date for ‘Australia Day’ and the content of the National Curriculum – or at least how it is applied in Victoria.

These debates are truly important. They are more than ‘distractions’.

After the ‘Australia Day debate’ the next logical step is for a Treaty with indigenous peoples.  And Conservative attempts to promote a National Curriculum which mixes Ideological Liberalism with uncritical nationalism – are deeply concerning.  But Labor’s position on the National Curriculum is also arguably too-conservative.   Arguably the National Curriculum should promote  ‘active, informed and critical citizenship.’  Which means deep and inclusive pluralism when it comes to informing students of the interests, social movements and ideological perspectives that have comprised Australian society. Here I am thinking along the lines of ‘post-Marxist’, Chantal Mouffe’s ‘radical pluralism’ , or ‘Agonistic Democracy’ ; and how those principles might be reflected in curricula.

Nonetheless these debates are more ‘tolerable’ for capitalists and the wealthy than debates which question neo-liberalism, labour market deregulation (but no right to strike),  and ‘small government’.  (Though perhaps the debate on Education is less ‘tolerable’, here, than the Equal Marriage debate.  There is the potential to detract from narrow emphasis on ‘labour market demands’ ; and to encourage critical thinking and active citizenship which may meaningfully strengthen our democracy).

The debates are substantial ; are not ‘merely distractions’ ; but the way public debate is presented these debates do constantly and over-the-long-term deflect attention away from a substantial, more wide-ranging debate on the economy, and especially economic power and inequality.

Debates are also framed in such a way as to divide Labor’s traditional constituencies ; with the decline of class as a central ‘reference point’, and erroneous assumptions of ‘essential working class conservatism’ and ‘aspirational’ mentality’. ‘Political correctness’ is also regularly beaten-up in order to weaken Labor’s base via attrition.  In response Labor needs policies and language which promote social solidarity.


But anything which truly questions ‘Convergence’ is summarily dismissed as ‘Hard Left’.   Outgoing Labor President Mark Butler has made welcome demands for internal democratisation . But his description of British Labour’s Jeremy Corbyn as ‘Hard Left’ is regrettable. Corbyn is trending towards something more ‘traditionally social-democratic’ ; and has plans for railroad and utility re-nationalisation  that would ‘set a precedent’ whereby decades of privatisation are not necessarily permanent.  The policies are progressive, but not radical ; and Butler’s dismissal of Corbyn shows that ‘Convergence thinking’ still has a strong grip even within the ALP Left.

What would a ‘break’ from Convergence Politics look like?  The author of this article has been working on an updated  (unofficial) “Model Platform” for Labor (currently in draft form) which is suggestive of a genuine reform footing for the ALP.  As a democratic socialist my long-term aim is the eventual surpassing of capitalism with a truly fair, rational and democratic economy. But even Marx understood that the transition from feudalism to capitalism took centuries. (though Marx did think socialist revolution a nearer prospect at the time)  And now there is the likely prospect ‘a clear and genuine break’ will not occur in our lifetimes.  Though the prospect of further crises and economic convulsions is nonetheless real.  Perhaps ‘barbarism’ is the more-likely prospect ; though we have to fight.


On the other hand, many on today’s Left still look to the Nordics for inspiration.  The Nordic model may not have ‘abolished’ capitalism ; but what some see as ‘the end goal’ is not everything. Billions of people will live in the context of historic compromises we fight for over the decades to come.  Their security, opportunities and happiness truly mean something with or without the over-arching capitalist context.  Yet sadly most in the Labor Party have not supported policies which meaningfully progress Australia towards something ‘Nordic-inspired’.

The ‘ALP Model Platform’  (otherwise ‘For an Equal and Democratic Australia’) , suggests a short to medium term orientation, which breaks with ‘convergence thinking’, and has the meaningful aim of reaching the OECD average Tax to GDP ratio over as long as three terms of Labor Government.  That means raising progressive tax by $80 billion/year in today’s terms, or 5% of GDP.  (keep in mind the economy is worth over $1.6 Trillion)  It falls far short of the Nordics. (perhaps over $300 billion/year would be necessary) But it is suggestive of meaningful and substantial progress. (no more ‘one step forward, two steps back’ ; ‘the forward march of labour re-commences’)


What this means is substantial progressive restructure of Australia’s tax mix ; funding big improvements to the social wage, welfare, public provision of infrastructure.  It also means National Aged Care Insurance ; slashing hospital and public dental waiting lists ; industrial rights and liberties including a ‘re-regulation’ of the lower end of the labour market which delivers to the working poor ; strategies to improve life expectancy for indigenous Australians and the mentally ill ; progress towards free higher education ; support for mutuals and co-operative enterprise – with strategic public ‘co-investments’ which help these maintain the scale necessary to remain competitive ; an end to insufficient and ‘punitive’ welfare ; a big investment in public housing ; and much more.  These are central to the ‘ALP Model Platform’: a document intended to influence debate leading up to Labor’s National Conference this year in July 2018.


Labor has long been a ‘broad church’ with its own ‘internal pluralism’, and that is not likely to change.  But Labor should straddle the political ground across ‘traditional’ social democracy to democratic socialism ; and arguably there is also a place for what may be called ‘classical’ social democrats.  (radicals inspired by the original (largely Marxist) social democratic parties ; and those who followed in their wake)

Arguably a  strong radical-left can also contribute to the climate of culture and public opinion as well.  The Communist Party of Australia never had serious electoral success.  But it was a cultural and industrial power.  Ultimately it broke with Stalinism, also ; and in many ways that legacy is important and valid.


In the US, Democratic Socialists of America (DSA) has been registering impressive gains in membership. They intervene within the Democratic Party ; but at the same time they are more broadly-based. They demonstrate how a Left movement can be a cultural, political and electoral force ; but not be restricted to a single electoral strategy.  DSA includes radical perspectives, but are not narrowly Leninst.  Perhaps a similar strategy could also ‘bear fruit’ in Australia ; with a strong challenge against ‘Convergence’ – which all progressives should agree has to end.


The current draft of the Model Platform can be found here:


Please join the supporters group ; and get like-minded friends to join if you support a strongly-progressive but realisable platform for the ALP.
Posted by Vaughann722 at 12:59 AM