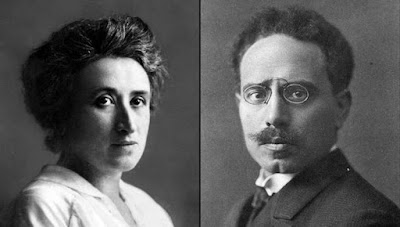 Comrade Marcus Strom alerted me and many others on Facebook that yesterday (15/1/19) was the 100th Anniversary of the brutal murder of Communist leaders Rosa Luxemburg and Karl Liebknecht ; and the dumping of their bodies in the Landwehr Canal in Berlin.  Liebnecht was an outstanding orator and leader.  Meanwhile, Rosa Luxemburg (a Jewish Communist ; born in Poland – but migrating to Germany where the class struggle appeared the most advanced) is the best remembered today.  This is largely because she is survived by a plethora of theoretical and practical political-literary work – much of it still relevant for the Left.

The broad example of the slide into war ; and the murder of Rosa and Karl is still instructive today of the dangers of certain kinds of ‘social patriotism’.  In 1914 the parliamentary caucus of the SPD (German Social Democrats) voted in favour of war credits – to fund the War.  This was against the standing policy of the Second International.  Specifically it was the right-wing leadership of the Social Democratic Government following the 1918-19 Revolution who ordered the murders.  For genuine socialists, the names “Ebert, Noske and Scheidemann” will forever live in infamy.  And deservedly so.

It is disturbing to think that the SPD was perhaps the leading Social Democratic Party in Europe in 1914 – and yet it crumbled under pressure at the first real hurdle.  Many socialists – including Karl Liebnecht and Rosa – tried to agitate against the coming blood-bath. Rosa was imprisoned for the duration of the war after distributing anti-war material.  For years social democratic parties had talked about internationalism in the instance of a conflict. But in practice the German trade unions had been subverted ; had embraced a kind of ‘ethno-nationalism’.

And they effectively fell into line in return for a handful of reforms.

Therefore perhaps there was no social or economic basis for stopping the war.  But the capitulation of the SPD parliamentary caucus set a demoralising example – which resulted in the split in the Social Democratic movement ; with the most uncompromising anti-war elements re-forming as Communist parties.

Right Social Democrats ; people like Ebert, Noske and Scheidemann ; were sold on ethno-nationalism in Germany since the start (of the war). They capitulated again when some social democrats argued the war should only be supported insofar as it was concerned with ‘national defence' ; and never be allowed to turn into 'a war of conquest'.  But the German Army hierarchy demanded open ended support for the war instead.  Again, in 1914 the caucus rolled over entirely.

Karl Kautsky – the leader of the ‘Marxist Centre’ – and for a time the most authoritative Marxist intellectual in Europe and the world -  argued for a symbolic abstention on the issue of war credits.  But this gained little traction.  Lenin was to revisit Kautsky’s position following the October 1917 Russian Revolution, branding him a ‘Renegade’.  But more on Kautsky later.

The real worry is how the unions remained so conservative at the start of the war. And swallowed militarist nationalism hook, line and sinker.  In any case the war was to destroy those same unions ; as worker’s organisation collapsed in the face of total war mobilisation. It shows that achieving intellectual leadership of a socialist movement is not enough unless socialist, anti-imperialist and internationalist values can be successfully imparted to a broader base. As well as a willingness to fight when the situation demands it.

Who knows what motivations drove the German Social Democrats to support war in 1914? Fear of imprisonment or execution? Fear of the organisational destruction of the party? (False) assumptions the war would be short? Penetration of the caucus by government agents? Again: many social democrats insisted that support for the war be withdrawn once it became 'a war of conquest'. But the reality was that the Army had the guns. Again: the parliamentary caucus folded in the face of military pressure.

But what many Leninist and Stalinist critics do not recognise is that by 1915 the 'Centrists' (ie: as in the Marxist Centrists) had began agitating for peace at Zimmerwald.  Those people argued for a separate peace. So did the Revisionist Socialist, Eduard Bernstein. By comparison, Lenin argued for civil war - to turn the war into Revolution across all Europe if possible.  For all Lenin’s criticisms of Karl Kautsky – by 1915 he (Kautsky) was himself openly fighting against the war.  The critiques of Bolshevism by such diverse figures as Luxemburg, Martov and Kautsky – are still worth reading today as we grapple with the meaning and legacy of the Russian Revolution and its eventual descent into Stalinism. (though many critics under-play the severity of the conditions faced by the Bolsheviks ; and the role of Western intervention in fuelling the centralisation and resort to Terror which opened the way for Stalinism ; That includes destabilisation and support for the White Armies – which meant the threat of starvation and heating fuel shortages for ordinary Russians )

Rosa Luxemburg is famed for her unique, libertarian Marxist contributions to socialist theory and practice.  Her theory of the ‘spontaneity of the masses’ is more nuanced than shallow critics would allow for ; positing a dialectical relationship between Party leadership and proletarian initiative. She recognised early on the potential of the Mass Strike.  Also, she feared the consequences of over-centralisation within the Bolshevik Party for any revolution ; and particularly the substitution of the Party – and later the Central Committee – for real, grassroots and participatory proletarian democracy.  For her there could be no compromise or ‘middle way’ between Reform and Revolution.  She was a strong critic of Revisionism ; including the positions of Eduard Bernstein.

But there are traditions of Left Social Democracy which are not stained by that. For instance the Austro-Marxists.  The Austro-Marxists built a participatory counter-culture (workers’ sports, radio stations, libraries, forums, orchestras) ; and progressively funded public housing and amenities like laundries and pools for workers.  They even maintained their own militia to defend ‘the democratic path to socialism’.  This contributed to the sense that ‘Red Vienna’ was ‘a showcase of Social Democracy’. Though they also made certain fatal mistakes (eg: letting go of their grip on the state apparatus of force in the 1920s) which made it easier in the end for fascists to seize power in 1934.

So as against Rosa Luxemburg I believe a ‘middle way’ of ‘revolutionary reforms’ is possible. But on the 100th Anniversary of her death it is better to honour her very significant legacy.  The legacy of her bravery and self-sacrifice.  Of her intellect ; her uncompromising values ; her commitment to the working class and her faith in what she believed to be the coming revolution.

On the other hand, the example of the 20th and early 21st centuries (including the rise of fascism ; and also of neo-liberalism) appear to have put paid to a sense that some ‘inevitable teleology towards socialism’ can be counted on.  Historical outcomes are far more contingent and uncertain than the old Marxists were willing to admit.  Even though the continuation of neo-liberal capitalism is likely to cause intense human suffering – with increases in the intensity of labour ; and further cyclical crises and class bifurcation. And environmental crises also.  Perhaps old Marxist claims to ‘inevitability’ provided morale and confidence.  (as Kautsky put it – “the proletariat’s belief in its own strength”)

But while there is *hope*, notions of inevitability can no longer be maintained.  Barbarism is as likely as socialism ; and that itself is a good reason to fight.

Rosa’s fears were realised in the end as Bolshevism gave way to Stalinism.  For Communists it is instructive to read her critiques of Bolshevism to get a sense of the dangers associated with Stalinism.  And also even with Trotskyism and Leninism.  Trotsky wrote of a ‘Soviet Thermidor’ in his critique of Stalinism, ‘The Revolution Betrayed’.   But in reality Trotksy supported the same policies of centralisation which led to a situation akin to the demise of the French Revolution - with the rise of the Napoleonic Empire in the place of the Republic.  (Stalin is seen as a ‘Bonpartist’ figure) ; Only Stalin’s repression of his own people – and his Terror against them - was far more extensive than under other ‘Bonapartist’ regimes.

Compared not only with Stalin – but also with Lenin and Trotsky – Luxemburg stands for a kind of libertarian communism.  To this day the leadership she provided with her activism and her writings – set a redemptive example for a Left which is often accused of ‘authoritarianism’ or ‘totalitarianism’.  Luxemburg  was a democrat and libertarian-revolutionary-communist ; and an uncompromising opponent of the wholesale slaughter of War ; and the Imperialist designs of the ‘Great Powers’.

My personal inclination is more towards the example of the reformed relative (Marxist) centre following World War One.  Especially the Austro-Marxists.  (though I am critical of them on certain counts as well)  But Rosa’s steadfast bravery ; her self-sacrifice in pursuit of peace, and for the liberation of the working class ; should always be honoured on the Left.

Today’s Left needs to engage with past Social Democracy (and Communism) if it is to understand its past ; draw the necessary lessons ; and better plan for its future. This should also include a consideration of the sources of the split in Social Democracy in 1914 ; and the historical ramifications of that. Rosa Luxemburg ; and others like Karl Korsch ; showed that a different kind of (libertarian) communism is possible.

A different kind of social democracy is also possible: committed over the long term to the pursuit of ‘revolutionary reforms’ which would deepen democracy, transform the economy , and over time challenge the class system.

May Rosa Luxemburg (and Karl Liebknecht) always be honoured and remembered on the Left.