Labor Must Ask Serious Questions on Policy and Values 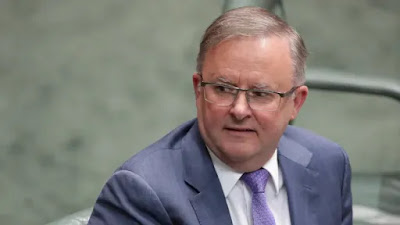 Above:  Albanese corrrectly indentifies the need for policy review and good policy ; But 'root and branch' rejection of Labor's 2019 Platform would be a mistake.  New policies and 'new angles' are necessary.  But let's not jettison our values and abandon our interests on the way.  Labor's problems were largely 'tactical' ; and this also needs recognition.

Labor has been saying relatively little on policy since its defeat at the hands of the Morrison Government.   Many are saying Labor’s ‘move to the Left’ was the problem.  In that process other problems are being neglected.  The Coalition tax scare campaign (including on a non-existent 'death tax'); Shorten’s wooden performance in the final days ;  failure to build a strong enough ‘central narrative’ ; confusion on Dividend Imputation franking credits – and the failure to means test any measures there instead of applying the same rules to everyone.  Also Clive Palmer's $60 million intervention - dwarfing the monetary resources of both parties - changed everything and channeled preferences to the Conservatives.  Shorten also failed to sell the progressive tax reform message ; and avoided the issue when given the opportunity to ‘take it up to Morrison’ in a Leader’s Debate.  (here I'm thinking of Shorten's refusal to engage on Morrison's example of a very-high-wage workers' tax rising by 2%(!) under Labor)

Expanding social goods and services necessitates progressive tax ; asking more of high income earners ; and that definitely includes the top 10 per cent.  Maybe even the top 20 per cent. Those in lower brackets need to contribute too based on ability to pay, but would receive much more in return.  Those in the lowest brackets may even receive indexed tax cuts.  (Income Tax needs to be radically restructured overall ; and then the lower brackets indexed – to prevent the erosive effect of bracket creep)  Tax indexation can prevent 'a flat tax by  stealth' via such selective exploitation of bracket creep.

In the big picture, though, Shorten led a united team and developed some very  good policy during his years in the leadership.   His modestly reformist policies have widely been portrayed as a ‘lurch to the Left’ ; and that illustrates well the relative right-wards shift in Australian politics where anything in the way of meaningful reform faces that kind of accusation.

But the Coalition’s massively irresponsible policy of tax cuts ($160 billion over the first 10 years, and much more proportionately over the longer term as ‘phase three’ kicks in) for the well-off put the onus on Labor to mount a response.

We know we have an ageing population.  For the Left at least, we know tougher means tests, a higher age of retirement, failure of benefits to keep up with a rising cost of living and respond to the need to extend pensions more broadly – should be unacceptable.  Undermining the tax base is the road to a US-Style and strongly class-divided economy and welfare state.   An ageing population will also mean more stress on the health system ; and the correct response is to support citizens on need rather than adhering to some arbitrary ‘tax ceiling’ which can only respond with harmful austerity.  Medicare Dental remains an essential policy for Labor to embrace and campaign on vigorously.

To his credit, Albanese has come out against attacks and stigma against the unemployed.  But we need more.  Raise Newstart by at least $75 a week.  Apply active industry policies aimed at creating job opportunities for ‘at risk’ and vulnerable groups.  Not only the young unemployed, but especially the older unemployed ; and the disabled – including the mentally ill.   Highly educated older job-seekers are being forced to drop their qualifications from their resumes to be ‘more attractive’ for cleaning jobs and the like.  Meanwhile, while many look down on the cleaning profession it does involve skills, and it is hard work.  There is cause to reform the Award in these and other fields – for example Aged Care and Child Care. But where the market will not bear this we need government subsidies. Importantly, many of these areas are highly feminised.

Denmark provides an example in a sense.  That is with their active industry policies which seek development of ‘sunrise industries’ that make use of the skill sets from ‘sunset industries’, mixed with retraining. The policies are expensive: but the gains from labour market participation more than make up for that.

In that process we need to review the  NAIRU – or non-accelerating inflation rate of unemployment – which supports a ‘buffer of unemployment’ (commonly in the vicinity of 5 per cent) to contain the bargaining power of workers and avoid wage inflation.  Hence there are always many more people looking for work than there are jobs – and yet still the unemployed face stigma. Instead we need to look to fiscal policy to contain inflation ; and co-operation with trade unions (eg: accepting higher taxes on high wage workers) in return for expansion of social goods and services and defence of industrial rights.  This would be applied after the Swedish model rather than the Accord – which at the end of the day failed to deliver to workers sufficiently in return for wage restraint.  Full employment makes a massive difference to the Budget and the broader economy if it can be sustained.

In short, Labor needs to take action to raise the status of some of our most exploited professions – while reforming the tax base and making social wage, social insurance, collective consumption, and welfare state expansion possible.

Let’s explain these one by one to get some sense of what is meant.

‘Social Wage’ refers to the recognition that not everyone receives wage justice. And sometimes it is more effective to receive the proceeds of wages collectively to maximise the collective (and individual) benefit.  Think public health and education.  Corporate Taxation also factors in here as the corporates benefit from a healthy and skilled workforce.

‘Social Insurance’ refers to public-funded insurance against contingencies like unemployment, ill-health or disability via the tax system – which covers everyone.  After all – it could happen to any one of us – or our loved ones.

‘Collective consumption’ refers to when ‘the people’ get a better deal by consuming collectively via tax rather than as isolated consumers.  Leaving individuals with more money to spend at their discretion in other areas at the end of the day.

It is appreciated that people need a reasonable degree of discretion in terms of determining personal needs structures.  But ‘collective consumption’ delivers massively in the area of pharmaceuticals consumption (think the Pharmaceutical Benefits Scheme or ‘PBS’) ; and could deliver in other areas as well – eg: infrastructure and goods like water and energy – which are becoming more unaffordable following effective privatisation.  Also think public infrastructure like ports, roads, public transport. communications: which should flow from the public purse where the state’s superior rate of borrowing and not-for-profit stance can deliver a better deal.  (water, ports, communications, transport infrastructure - should be re-socialised - reducing overall cost-structures; Though in some areas (eg: energy) some kind of 'market' should still exist ; But in the context of a public monopoly provider ; much more affordable, but still an incentive to regulate usage)

The “Welfare State’” is often taken in a catch-all sense which covers all of this, but for now think of the tax-transfer system and the need to support vulnerable Australians.  Newstart is the area of the most dire need ; but a 15% increase in other pensions can also be justified ; as well as support for the National Disability Insurance Scheme and the implementation of a National Aged Care Insurance Scheme (in response to the Royal Commission) which provides high quality services both for at-home and residential care on demand, and without onerous user-pays policies which send ‘consumers’ broke.  That also includes high quality food, quotas , a registered nurse on-site always , training in the handling of dementia , at-home packages on demand , rehabilitation and exercise on-demand , regular GP visits , private rooms , and meaningful (often facilitated) every-day interaction and outings (where possible) instead of just seating people down in-front of TVs all day.  For those ‘at home’ action to combat loneliness is crucial.

More public housing – perhaps interspersed with private housing to avoid stigma – is necessary too in order to tackle homelessness and housing stress.  But large scale public housing projects should also be considered – also providing quality amenities: laundries, pools, common rooms, internet connectivity – which people can respect and appreciate.  Austria manages a high level of public housing well – with very positive results.  Indeed, over 60% of Vienna’s population live in public or social housing.  It is the legacy of the interwar revolutionary Social Democrats (at the time officially of  a Marxist – but not Bolshevist -  disposition)– who prevailed in Vienna in the 1917-1934 period ; and who took government with a more modest agenda in the post-war period.

Eugene Quinn argues the following ; outlining the difference in culture re: public housing in Vienna which could be promoted in Australia as well:


“People here are used to the communal spaces of the social housing estates and are very comfortable living next to someone from a different background,”  Quinn says. “And because people are not crushed by their rents like in other major cities, they have a bit more time to be creative, to study, to get involved in community work.”

Apart from these areas, Labor also needs to take a strong line against the Coalition's ‘Ensuring Integrity’ union-busting laws.  Some in the Left dislike John Setka.  But more is at stake here than one man.  We are talking about the strategic position of the entire movement.  Which the Coalition well knows.  And Labor must acknowledge that as well.

In short, inevitably there must be a policy review.  But let’s be careful about dumping good policy.  Sure, let’s hone our message and our central focus.  Though we need a tactical campaigning review also: perhaps more so than a ‘root and branch’ policy review overall. If we cannot at least reverse Morrison’s overall tax cuts in a progressive way – focusing on tax cuts for the well-off – then we concede defeat.  That would mean conceding an Australia which retreated from anything recognisably social-democratic , and headed towards the divisions and insecurity we see in the US for example.

Importantly we must embrace the message of progressive tax and its implications rather than running away from that debate.  Trying to be ‘everything to everyone’ and not increase the tax burden on virtually anyone – means we have no way of funding reform at the end of the day.  But an openly progressive agenda would give the vast majority an incentive to vote Labor.

It is nonetheless appreciated that ‘middle income’ is not the same as ‘middle ground’, and some disillusioned voters are embracing a ‘centrism’ which is largely right-wing in practice.  Labor’s response must be tactical: appealing not only to interests but also to values.  A liberal response on social values, and stronger action on climate change can also detract from any ‘small ‘l’ constituency’ for the Liberals ; and pressure the Liberals to reform their own outlook ; shifting ‘the relative political centre’.  Labor must contest values in the economy as well as the 'culture wars' ; and its relative neglect here has marked a defeat for Social Democracy and Democratic Socialism in this country.

One thing is certain. Nothing is gained from a ‘culture of policy defeat’.  Labor must find a way to effectively campaign for government without compromising its values and reason-for-being.