Disability Pensions in Australia: Where entering into a Relationship can be a Poverty Sentence 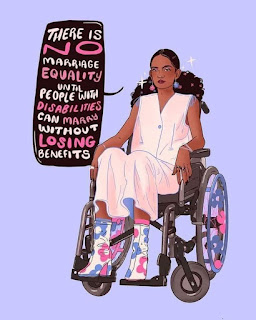 It is generally quite difficult to obtain a Disability Support Pension in Australia.  There are job capacity and impairment tests ; and many who are significantly impaired miss out.  But there is another problem that has been neglected in most debate.  Pensioners generally are assessed differently if they have a partner.  The consequence of this is that there is a perverse incentive for pensioners not to enter into a relationship or marry.  With the Disability support pension there can be a loss of income of around $200 a fortnight as a consequence of entering a relationship or getting married.  If the partner has a high income that is one thing, but many such couples could both be on low incomes or welfare.  Also: even if a person’s partner has a higher income, there is a problem with reinforcing dependence: with inhibiting the independence of Disability and other Pensioners.  When combined with other government measures: such as running a trial of the Indue Cashless Debit Card, or attempting to claw back money from the National Disability Insurance Scheme, it is clear we have a government which is trying to implement austerity aimed at the most vulnerable.

The bottom line is that these arrangements condemn hundreds of thousands of disabled Australians to probable isolation and loneliness ; where they must fear the financial consequences of having relationships.

At the same time, Medicare is under attack.  Labor MP in Bendigo, Victoria, Lisa Chesters has observed how recent cuts to Medicare will “radically alter the cost of hundreds of orthopaedic, cardiac and general surgery items. “  As Chesters explained: “Patients now face the prospect of life-changing surgeries being cancelled at the last minute or being  landed with huge bills they didn’t expect.   And yet these matters have received very little attention in the mainstream media.

We need a Labor Opposition which defends Medicare and the National Disability Insurance Scheme. (NDIS)   But we also need a Labor opposition which goes beyond the strictly defensive ; and comes up with innovative and ground-breaking measures to extend the social wage and welfare state ; along with legislated wage increases for those on low incomes.

This would inevitably involve tax reform. Ideally Labor should be aiming to reform progressive tax to the tune of 5% of GDP over 10 years, or at least three terms of Federal Government.  This would bring us closer to OECD average levels of tax and social expenditure.  Rolling back unfair means testing of pensions – including Disability Pensions - would empower hundreds of thousands of women and men with greater independence ; and if we are concerned about equity we need to reform tax in other areas for people with higher incomes.  It would also empower those people to enter into relationships without fear of destitution. Eligibility tests should also be relaxed so those incapable of full time work are not threatened with exclusion.

The ‘LIFE’ (Living Incomes for Everyone) campaign is demanding a minimum $550 a week for all.  This would mean a great deal for job-seekers living in poverty, especially if combined with other measures like investment in public housing.  Effectively it would mean a guaranteed minimum income. (GMI)  Disability pensions specifically should increase further - by at least $150/fortnight in any case – rising to about $1100/fortnight.

No-one should be in the position of having to say they ‘cannot afford to enter into a relationship’.  The NDIS, despite its faults, was a big step forward for disabled Australians.  Instead of panicking over the cost we need to accept that providing services for these people meets what is perhaps the most defensible socialist principle: that each should contribute what they can, and receive what they need.  This principle needs to become a society-wide ‘common sense’ so that they are accepted even by many Conservatives ; as for instance occurred with the issue of Marriage Equality for those in the Queer communities.  But ironically there is no real ‘marriage equality’ for all if some need fear being thrown into poverty should they enter a relationship.

Progressives need to agitate to make this a real issue in the upcoming Federal Election.  The advocacy of Julia Gillard and Bill Shorten was crucial for the initial implementation of the NDIS.  The NDIS is not perfect, but is a vast improvement on the vacuum that existed beforehand.  Now we need additional policy champions within the ALP agitating to take the reform process further.  The Labor Aged-Care and Welfare Movement (LAWM) has adopted this as one of its objectives.  But we need more avowed Labor members to join our Facebook Group ; and to advocate for change.  Much as has happened with Rainbow Labor, Emily’s List, Labor for Refugees, and LEAN.  (Labor Environmental Action Network)  Currently LAWM exists at the level of Facebook ; but over the long term we want to achieve much more.  If you’re a Labor member and haven’t joined LAWM yet, pls do so.  And for Bill Shorten, Julia Gillard and others: Please take up this cause and make it an issue for the upcoming Federal Election.