Socialism and ‘saving capitalism from itself’ – A response to Nigel Farndale 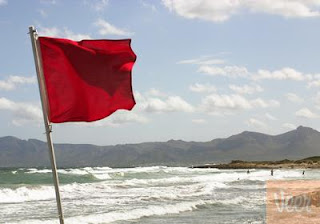 above:   the red-flag in a characteristically Australian context

The following is the first-ever post for 'ALP Socialist Left Forum'. To 'kick off debate' this article comprises discussion of British author Nigel Farndale's call for moves to 'save capitalism from itself'. What are your views?   What is the relevance of this debate for how we see ourselves on the Left; and for our policy agenda?   We welcome opinions across the spectrum of the ALP Left - whether more radical or relatively moderate.

ALP Socialist Left Forum is also a Facebook Group and blog open to ALL ALP Left members and genuine supporters.

In the midst of the worst global economic crisis since the Great Depression, British author Nigel Farndale has had published in the Sydney Morning Herald an interesting article exploring the means in which capitalism might be reformed – perhaps ‘to save it from itself’.
Farndale considers two economic movements in the context of his article.
Firstly, he considers the ‘decroissance’ (ie: ‘decrease’) movement in .  This movement denies the centrality of General Domestic Product () to ‘economic success’ – pursuing ‘quality’ for all rather than mere ‘quantity’. Hence Farndale quotes chief-economist, George Magnus on “the need for a happiness index, or an economic and social well-being index”. Crucially, this perspective seems also to recognise environmental constraints for certain kinds of growth – capitalist or socialist.
Secondly, Farndale mentions the “PARECON” movement – which promotes ‘participatory economics’ – with worker’s self-management and solidarity, and greater equality for people in their status as consumers as well as workers.  But although otherwise sympathetic, Farndale dismisses the concerns of this movement for equality in terms of economic power as “back to basics communism”.
Farndale argues that capitalism is a dynamic and evolving system.  Indeed, he contends that ‘capitalism is to thank’ for the welfare state. He seems to argue that only capitalism – through competition and enterprise – can provide growth and recovery. After all – what alternative is there if capitalism ‘has been [with us] through antiquity, feudalism” and so on? And if capitalism is reducible to the existence of markets surely it is inevitable in one form or another…
In response to Farndale, it is important to challenge his conception of both modern capitalism and socialism.
For Marx modern capitalism meant more than the existence of private ownership and markets.  Under the modern capitalism identified by Marx production for profit, and the rise and dominance of a specifically capital-owning bourgeois class came to eclipse the remains of feudalism. It also saw the demise of artisanship and craft labour and the marginalisation of old forms of self-employment.  In their place capitalism brought mass production, mechanisation, deskilling, and an unprecedented commodification of labour.
During this early period wage labour was a matter of subsistence with workers realising little of the increased productivity for themselves. And unlike with artisanship and the craft economy, the product of the worker did not belong to him/her, but was expropriated for sale by the capitalist. (Hence for workers there was – and still remains - a degree of unpaid labour time and effort) This was in addition to the alienation resulting from brutally demanding and unsafe work practices, involving men, women and children on 14 hour days, with night labour, and worse.
Increasingly, however, the capitalists who expropriated surplus from these workers were seen to develop into a ‘rentier’ class: who by virtue of their wealth could simply delegate matters of management. Of course it wasn’t all like this: there were innovators and visionaries (as there are today); and there were the small capitalists who worked as hard as anyone. These people often went bust in the face of competition; and more particularly in the face of increasing monopolisation. (which meant they could not compete)  While Marxists such as Karl Kautsky appealed to the small-capitalist middle classes that socialism would provide them with security, Conservative, fascist or economically-liberal forces (a mixed bunch) tried to turn their attention against the organised working class as a threat to their survival in the capitalist context.
But the boom and bust cycle – and capitalist crisis more generally - was more than the ultimately ‘creative destruction’ Farndale refers to. There arose structural and functional unemployment – with a ‘reserve army of labour’ exploited to inhibit working class organisation; driving down wages and conditions, as well as inhibiting employment security. There was immense waste as competition forced the premature and continuous modernisation of the means of production - even when existing machinery had not yet been sufficiently utilised.

Only the monopolists with huge reserves of capital could survive in this environment – hastening the concentration of ownership power. In the event of cyclical crises immense amounts of capital and produce were destroyed because unprofitable in the marketplace– even where there was massive unmet human demand and need. Inequality of wealth amongst consumers narrowed the market and thus actually inhibited the system.