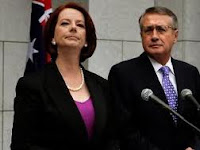 
In the ‘Herald-Sun’ March 25 Herald-Sun propagandist-in-chief Andrew Bolt gave us a sense of the probable Conservative strategy come September.  Bolt accused Julia Gillard of a “politics of hate”, and of a “divide and conquer” strategy.  Some on the Left are suggesting a return to some kind of Accord (as attempted by Labor in the 1980s) -  partly in order to counter this kind of rhetoric.


The principle of social unity and comprehensive social peace under the aegis of “national reconciliation” by Hawke was a powerful discourse – but was also always problematic.  It was seen as the unions’ responsibility to compromise; to consent to wage restraint and labour market deregulation for relatively little in return.  All the while the very principle of industrial militancy – whether in defence of political rights or in the form of collective bargaining – was delegitimised.  Labor governed during these years. But despite a formal partnership in the Accord process, in reality the  labour movement was on the defensive. Wage restraint was accepted to ‘buy time’ and ensure short-term organisational survival. Over the long term the movement continued to demobilise.


While it is not the inevitable consequence, there is often the danger in corporatist arrangements that those groups so co-opted – for instance unionised workers – will have their interests subordinated to those of the state, and of the more powerful partner in any agreement – the capitalist class.  Quite likely Bolt would respond to such a suggestion – that there is a capitalist class, and that it promotes its own interests ahead of the interests of workers - as ‘class war rhetoric’.   But sadly it is simply a social fact – a fact almost considered ‘unspeakable’.  That is – that classes exist, and that at certain levels they have distinct and sometimes antagonistic interests.


And so today Bolt hides behind rhetoric of social peace – all the while the Conservatives he backs play their own ‘divide and rule game’.  They pit workers against environmentalists on the basis of lies about the impact of the carbon tax on cost-of-living pressures.  They seek to divide workers against job-seekers on the basis of distortions regarding the numbers of long-term-unemployed, and the assumption that welfare must be ‘punitive’.  On such a basis – resentment against the welfare dependent - they hope even to win the support of the low-paid. Yet they do not support wage justice for those very people whose support they court.  They speak the language of ‘social peace’ while working to remove industrial rights; worsen punitive welfare or even remove welfare entirely; exacerbate user-pays mechanisms in higher education; raise effective taxes for low income Australians; and abolish the low-income superannuation contribution introduced by Labor to assist disadvantaged workers.


Meanwhile – regardless of whether it was his intention, Martin Ferguson’s stated aversion to “class war rhetoric” was a gift to the Conservatives.  This is a statement that must be viewed in the context of a monopoly mass media campaign which portrays all distributive justice initiatives as ‘class warfare’.  Any hint of progressively structured taxation - or progressive means-testing of benefits like the Private Health Insurance Rebate - has been consistently labelled as such. As most likely would be the removal of superannuation concessions for the top 5% income demographic.  (notably not the same thing as a new tax; or indeed a tax at all!)  It is a deliberate strategy.


By contrast, attempts to stigmatise, vilify and criminalise trade unions and trade union activity do not attract the same label of ‘class warfare’.  And neither did the mining industry’s abuse of its enormous economic clout and pool of resources to launch a relentless campaign of fear against the original Resource Super Profits Tax – in defence of its own sectoral class interests – and against the interests of the country-at-large.


That said - ‘democratic class struggle’ – so-dubbed by Swedish sociologist Walter Korpi – involves ‘historic compromises’ depending on the balance of class forces.  The problem, though, is that for decades Swedish workers negotiated from a position of organisational and electoral strength – whereas Labor faces a weakened union movement and a united front on the part of Australia’s monopoly mass media and mining establishment.  Labor needs to construct its own ‘historic compromise’ for modern times.  But the labour movement cannot afford the kind of compromise which would see it further weakened and demobilised.


So if Labor is to revive the idea of an ‘Accord’ – it needs also to learn from the mistakes of the past.  The labour movement cannot afford further strategic retreats.  Though some ‘common ground’ with the liberal bourgeoisie may be possible on education and training, Newstart,, infrastructure, the price on carbon and other issues.  (for example, note the positions of former Australian Industry Group Chief Executive, Heather Ridout)


What should Labor do?   Further austerity and imposition of regressive user charges for everything from aged care to transport infrastructure are certainly not the answer. Yet somehow Labor needs to bring together diverse constituencies – white collar professionals, unionised industrial workers, students, low income workers, and ‘post-materialist’ elements concerned more with work-life balance, as well as environmental and liberal rights.


Gonski and NDIS are powerful weapons in Labor’s policy armoury; as is the frightening prospect of an Abbott government which would slash and burn welfare and services on an unprecedented scale.  Labor’s subsidisation of the wages and career paths of child care, aged care and other community sector workers – comprises a real step forward – and an advancement for women who are disproportionately represented in these fields.  More action is necessary, but hopefully Labor should be able to count on their active support, now, as the September election approaches. But Labor’s Sole Parents decision is a ‘running sore’ that must be rectified come the May Budget.  Another callous decision was  the policy of unfairly tightening disability pension eligibility, with some of our more vulnerable Australians relegated to a highly-deficient Newstart payment.


But if Labor does need to project a ‘historic compromise’ what should it look like?  I am suggesting the following positions as a basic policy framework for September, capable of mobilising broad support in the electorate without damaging industrial concessions:


Firstly: Equal opportunity in education – both in the sense of meritocracy, as well as in the sense of labour market requirements, and high quality education (including extensive liberal/civics education) as a social right.


Secondly: Social Insurance.  Progressively financed protections for all Australian suffering a disability, and for the Aged Care requirements of all elderly Australians; provided on the basis of need, and excluding regressive user pays mechanisms for low income and working class Australian families.


Thirdly: Maintained commitment to a price on carbon emissions, and to direct public investment in renewable energy; as well as subsidies for low income Australians especially to invest in renewables, and so to lessen cost-of-living pressures.


Fourthly:  Maintain the bulk of the Fair Work Commission’s industrial relations regime; except revisit the theme of modernised Awards; Intervene directly to raise minimum wages in real terms, and deliver on the previous promise that no worker be left worse off.  Defend pattern bargaining.


Fifth: Deliver a diverse Australian media, not only seeking to wind back virtual monopolism; but also encouraging new entrants into the sector for the sake of pluralism; and maintaining funding for a public ABC and SBS – with charters to deliver on diverse local content, and promoting political balance to deliver meaningfully on that policy of inclusive and authentic pluralism.


Sixth: Deliver further on effective cost of living relief for those who really need it; Achieve this through tax restructure and welfare reform (including raising Newstart) as well as increased minimum wages.  To that same end seek to contain further cost-of-living pressures by ruling out infrastructure privatisation and regressive user-pays charges for existing and future infrastructure; and by publicly funding future communications, energy and water infrastructure. (reducing borrowing costs; and including the National Broadband Network)  Commit that if user charges do apply for state-owned transport infrastructure that they will be progressively structured (excluding low income groups), spread fairly, and will not effectively discriminate against Australian families and workers – often in new, infrastructure poor suburbs -  who lack access to sufficient public transport.


Seventh and Finally:  Fund all these policies progressively. No more austerity for vulnerable groups.  An absolute Minimum policy of withdrawing superannuation concessions (not the same as a new tax!) for the top 5% income demographic, and reverting to 75% dividend imputation – drawing in $15 billion in new revenue.  Furthermore consider reform of the Minerals Resource Rent Tax, and implement a progressively scaled levy to assist in funding NDIS and Aged Care Social Insurance, cementing the principle of ‘Social Insurance’ in the public’s imagination and vocabulary.


Labor is seeking to follow in the footsteps of the Obama presidential campaign – mobilising ‘on the ground’ on an unprecedented scale.  But the social forces Labor is hoping to marshal will demand more than rhetoric; with “one step forward, two steps back”, or ‘robbing Peter to pay Paul’. Already teachers, aged care workers, child care workers and community sector workers have good reason to support Labor in 2013.  A revisitation of the MRRT, with some revenue being deployed to support industries impacted by the high Australian dollar – could also get some employers ‘in Labor’s corner’.


At this point the possibility of ‘Bob Katter’s Australia Party’ holding the balance of power should not be dismissed either.  Some on the Left support ‘free trade internationalism’, but if an accommodation with agrarian interests is what it takes to spare Australia an Abbott government, dealing with Katter should not be ruled out.  Indeed, it was just such a manoeuvre that preceded decades of social democratic hegemony in Sweden beginning in the 1930s.  Katter is also sympathetic when it comes to industrial rights.  Though if it comes to that Labor should bargain hard in the search for common ground, and not relent on matters of social conservatism or environmental sustainability.


Labor has a long and difficult task ahead of itself, fostering party unity and mobilisation in the wake of recent events.  But we should not give in on the struggle before it even really begins.  The May Budget will be crucial. Labor must be in a position to fund Gonski, the NDIS and Aged Care Insurance without austerity elsewhere.  For Gonski and the NDIS alone it has to raise over $20 billion in the context of a $1.4 trillion economy. (more to include Aged Care Social Insurance)


Australia is one of the lowest taxing nations in the OECD.  Specifically, Australia’s federal tax intake (excluding state taxation)  is about 30% of GDP compared with 48.5% in Sweden.  So there is certainly scope for tax reform to provide for disability and aged care social insurance, as well as reform of education and welfare. This is what Wayne Swan and Cabinet need to keep in mind as the May Federal Budget is developed.  It will be the best chance Labor has to turn the debate around, and win credibility on funding its crucial signature policies.
Posted by Vaughann722 at 6:25 PM