Responding to Simon Crean on ALP unity and Government Policy 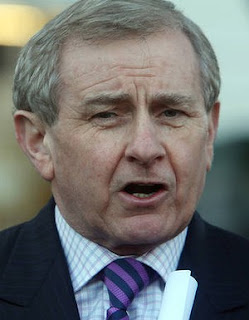 
Today in a media interview Simon Crean put a strong argument against the constant destabilisation process going on within the Federal Parliamentary Labor Party.  As he argued, the prospect of an Abbott government is frankly “scary”.   The tens of billions in cuts Abbott would follow through with would result in unprecedented damage to Australia’s welfare state and social wage.   The stratification of our education system would continue apace to the point where constructing a constituency for revivifying the state sector would pose a very difficult challenge.  Punitive labour conscription policies for the unemployed.  would acquire previously unthinkable dimensions.  Finally, Paid Parental Leave under Abbott would be skewed towards the truly wealthy at a time when the entitlements of poorer Australians are under attack.   One way or another the ‘leadership question’ needs to be permanently resolved ahead of the May Budget.  Labor needs a progressive Budget the whole Party can unite around in May.


A few hours, however, it seems are a long time in politics!  Just moments ago there was a spill for the Labor leadership positions. Crean had been instrumental in bringing the spill about – but without Rudd contesting it, Gillard was re-elected party leader unopposed.


From this Labor activist’s position there are two crucial issues.


One – is that the leadership speculation and destabilisation must be ended finally and categorically.


Secondly, Labor must remain on the policy front foot – and not step away from its commitments to Gonski and NDIS.


Also even the most robust superannuation funds will not achieve the credit rating of the Federal Government.


Preferably infrastructure user tolls of any kind should be avoided – as usually tolls take a form approximating regressive flat taxation.   Servicing public debt sustainably over the long term would deliver the fairest outcomes;  but progressively-structured  taxes may have to rise as consequence.


Reforming the tax mix is a better option – and as we will soon argue there are a number of progressive options available.   But if tolls are introduced in any way, they should take the form of tolls on public owned infrastructure – as occurred for a period with the Westgate Bridge in Melbourne and the Sydney Harbour Bridge.   That is: they should comprise temporary measures, without the drawbacks of privatisation.   And if they are applied at all, they can potentially resemble progressive taxation with a ‘tiered system’ for public and commercial use, and for individuals and families in particular income brackets. Indeed, such a system could form part of a ‘quid pro quo’ between the Federal Government and the States. It would assist the Federal Government in freeing funds for Gonski and NDIS while at the same time maintaining a progressively structured model of infrastructure finance.


The other potential ‘bogey’ Simon Crean raised was that of "taxes" on superannuation.  (a misnomer because the concessions comprise tax relief rather than taxes in of themselves)

Admittedly it is true that a fear campaign has already begun on the theme of superannuation concessions.  The upper middle class is concerned their retirement lifestyle may be threatened; and while many struggle to make do on the Aged Pension alone, the upper middle class see an annual retirement income of over $50,000/year as a ‘right.’   A recent segment in the 7:30 Report presented the matter in a most unbalanced fashion.


But is the theme of social class helpful for Labor?  Or is it a source of division, and hence electoral marginalisation?  And what does class conciliation really mean in a context where employers are opposing minimum wage increases, attempting to wind back penalty rates, and trying to prevent labour organisation?  Does it mean anything in the real world, or is it just an Ideology behind which social democracy has self-liquidated?


Already in another recent article we have noted that superannuation concessions have risen to prominence as a massive instrument for tax avoidance by the very wealthy – at the same time as user-pays mechanisms for the most basic infrastructure are being considered.  Specifically, superannuation concessions are currently around $30 billion, and will cost $45 billion perhaps as early as 2015.  And the top 5% income demographic alone is already receiving over $10 billion of those existing concessions.


In that same article we also observed that – by comparison – then entire Aged Pension Budget was only $25 billion in 2012.


This is more than ‘middle class welfare’. It is ‘upper middle class welfare’, and a subsidy for the wealthiest of all – the top 5 per cent – effectively paid for by everyone else. Despite Ideologies of class conciliation, distributive injustice is a glaring reality – which we must choose whether or not to facilitate and excuse – or whether to work for a more socially just alternative.  Tax avoidance and tax minimisation from the wealthy impacts upon the welfare and social services we all depend upon in Health, Aged Care, Transport, Welfare and so on.


In that same article this author demonstrated that by halving Dividend Imputation the government could bring in over $10 billion, and by removing superannuation concessions for the top 10 per cent income demographic Labor might recoup as much as $25 billion altogether.


And elsewhere the Greens had argued that raising the Minerals Resource Rent Tax (MRRT) rate to 40 per cent, eliminating loopholes and removing “generous accelerate depreciation provisions” could raise $26 billion our four years.


Finally,  based on statistics used by “Crikey’ last year, increasing Company Tax by one per cent could potentially bring in an additional $1.5 billion a year.  That kind of money could prove very useful come September if ploughed into Aged Care or mental health, for instance. It is about time to draw a line under decades of corporate tax cuts.  For decades now a regime of ‘corporate welfare’ has taken root, with lower taxation for Companies and wealthy private investors – at the same time as government struggles to pay for basic infrastructure and education expenses – which the corporate sector shares the benefits of.


The bottom line is as follows.


Federal and State Governments are facing a ‘legitimation crisis’ stemming from their inability to pay for basic infrastructure, and their plans to revert to user-pays mechanisms on the understanding that real progressive tax reform is ‘unspeakable’.


And Labor is in a bind in so far as it is not yet proposing a concrete, fair and sustainable way of financing Gonski and NDIS -  policies which it is committed to and on which Labor’s credibility rests.


But if Labor implements reforms rapidly following the May Budget; and can establish that tax measures are aimed squarely at the upper middle class and the wealthiest of all – It can demonstrate that state-financed infrastructure, as well as Gonski, NDIS and Aged Care insurance are in the interests of the vast majority.  (Though arguably NDIS should involve a more broadly-based levy in addition – to establish the principle of ‘social insurance’.  A ‘mixed’ funding mechanism could also bring in additional revenue for Aged  Care – where user pays mechanisms and the often poor quality of care are a national disgrace.)


On the other hand, if the media is still speculating on the form of tax reform and superannuation reform by September, the uncertainty and fear mongering could be damaging. It was protracted speculation which left a lasting negative impression with regards the Carbon Tax even after implementation should have put paid to the fear campaign.


But even if superannuation concessions were revoked and that revocation locked in’ for only the top 5% income demographic – It would still yield a pool of over $10 billion.  And the modest measure of implementing 75% dividend imputation would yield over $5 billion.  Taken together, those measures would comprise a very good starting-point from which to fund NDIS and Gonski, even though further initiatives are also desperately necessary to fund far-reaching reform of Aged Care.


The Greens’ proposals for reform of the Minerals Resource Rent Tax (MRRT) – bringing in about $6.5 billion a year - could be enough to provide for a strong suite of policies for Aged Care reform – including  removal of user-pays mechanisms for poor and working class families, and improvement in areas such as staffing, diversity and quality of environment, privacy, facilitated social interaction and so on.  Another option would be to establish National Aged Care Insurance with a Medicare-style levy – but with progressive tiers.


Finally, there is the prospect of freeing funds through the further curtailment of ‘middle class welfare’.   Adam Creighton over at ‘The Punch’   has argued that “More than 11 per cent of households in the top 20 per cent of the income distribution – with incomes above $115,000 – receive some form of welfare payment from Canberra…”   He argues further that: “Family Tax Benefit B, which is paid to households with incomes up to around $175,000 a year, is the main culprit.”


To elaborate: According to “The Australian’ “NATSEM's* modeling shows that removing [Family Tax Benefit B] from families with combined taxable incomes of $100,000 onwards would save about $500 million a year. “  That money could be employed to reverse the callous government policies for Sole Parents, with hundreds of millions to spare.


Further means testing could also apply to the Private Health Insurance Rebate, removing it entirely from singles in the $97,001-$130,000/year bracket and for families in the $194,001$-260,000/year bracket.  At an estimate, this could bring in additional hundreds of millions every year.


But it is VERY notable that these measures pale in comparison with what could be saved from more ambitious reforms of superannuation concessions for the wealthy,  and a partial curtailment of Dividend Imputation.”

And over-targeting of welfare has the potential to narrow the demographic support base of the welfare state over time.  More broadly, there needs to be a balance between means testing of welfare, and the principle of universalism - for instance as embodied in Medicare.

When Labor’s credibility depends on the sustainable funding of Gonski and NDIS it simply doesn’t make sense to rule out two of the most effective and progressive means of paying for those programs. And Labor cannot afford more of the callous austerity that cost the government deeply in terms of a popular backlash against cuts to Sole Parents. Reform of superannuation concessions MUST stand; and reform of Dividend Imputation must also remain an option in providing the necessary funds for those programs.