Conservatives’ Budget puts the wealthy first. Services and Infrastructure to suffer in the End Analysis 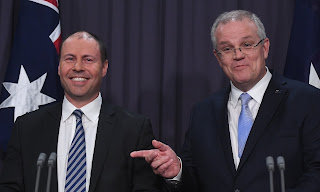 Most of the Australian media is trumpeting the Morrison Governments' tax cuts for “low and middle income” Australians.   But does this stack up under analysis?  Ross Gittins at The Age dared to buck the trend and pointed out that this is overwhelmingly a Budget for higher income Australians.  He observes that the real cost of the tax cuts over ten years will skyrocket to “a staggering $302 billion”.   That will inevitably lead to austerity: with a potential hit to Health, Education, Aged Care, infrastructure and so on.  It will mean neglect and user pays ; and that will also hit genuine low to middle income Australians hardest. Those on $925 or less a week will receive nothing, while those on $3485 or more a week will receive $75/week.   These people (the wealthy) are less likely to spend, also, as compared with lower income Australians. That could also be bad for the economy.  (‘The Age’, 3/4/19, p 7)

On the other hand, there’s $724 million for the elderly “over five years”.  (Herald-Sun 3/4/19, p 13)
It sounds like a lot. But it won’t go anywhere near addressing waiting lists for ‘at home’ services ; or improvements in residential services: such as subsidizing the sector to pay for aged care worker ratios and a registered nurse on-site 24/7.  There’s mandatory reporting for neglect leading to starvation. (which is common)  But that cannot be policed without extra aged care workers.  And aged care workers need better pay and conditions as an incentive to remain in the sector.  There’s also a need to emphasize ‘quality of life’ for those at home or in care – with programs to keep people socially and mentally engaged.  Something more than being sat in common rooms all day in front of a television.

There’s a projected surplus of $7.1 billion over the next financial year.  (‘The Age’, 3/4/19, p 2)   At least $1 billion of this could have been redirected into Aged Care – where it is desperately needed.

Ian Yates of the Council of the Ageing argued that:  "Up to 125,000 older Australians are waiting up to two years for home care, [leaving] many dying while they wait”.

The blunt fact of the matter is that the Coalition is trying to buy votes with tax cuts: but the consequence will inevitably mean a hit to the social wage and welfare state ; and probably more privatised infrastructure.

While Labor does not oppose all tax cuts per se, Chris Bowen rebuked the Government, arguing the emphasis should have been on those on “less than $40,000.”

That said, there are some sensible measures: such as $3 billion of investments in “suburban rail station car parks” in an attempt to bust urban traffic congestion.   As well as an emphasis on transport infrastructure in outer suburban Victoria. (‘The Age’, 3/4/19)

There’s also money supporting apprenticeships and supporting scholarships to rural universities, and close on half a billion for pre-school education.  Hundreds of millions on mental health and Medicare sound significant: but they’re staggered over several years ; disguising a reality of neglect: which will become clearer as the shrinking revenue base leads to austerity.

The bottom line is that there are a host of priorities demanding our attention: but we end up with neglect in order to conform to small government Ideology ; and to prioritise the higher income Liberal core base.

There’s a need to ‘fix Medicare’ and further expand into dental.  An extra billion a year could easily go into providing more mental health capacity and cutting hospital waiting lists.  As already observed: there’s a drastic need for more resources in Aged Care.  Again: nothing short of several billions would ‘make a scratch’ on these problems.

A $75/week increase to Newstart is very much overdue:  such that people are left homeless, or without the resources to effectively search for work in the first place.

Pensioners could do with a minimum $25/week boost (fully indexed) – which means a great deal for someone living in poverty. Disability Pensioners could also do with more flexibility in supplementing their income with casual work.  Students could also do with more financial support. Taking on part time work can provide experience ; but it can also make it impossible to keep up with studies. That’s bad for students ; but also for the government which is contributing to the investment in the event that people end up ‘dropping out’.

It’s also true that State Governments are running out of assets to privatise. For a long time this was treated like some ‘magic pudding’ to fund newer infrastructure. ‘Asset Recycling’.  But that cannot go on forever.  And there are associated costs.  For instance the privatisation of the Port of Melbourne will see greater cost structures ‘flowing through’ all through the economy.   This (lack of funds for infrastructure) can only be rectified with higher taxes overall (preferably progressive) ; or through regressive user pays which hurts citizens more in the end than higher taxes.  Still: state governments’ tax options are limited ; and those privatisations should never have happened in the first place.

Many of Labor’s projected tax reforms are very welcome.  Negative gearing cuts which exclude new properties will lead to more home construction and more jobs.  It could also end with better housing affordability. Meanwhile ; cracking down on concessions for excess dividend imputation credits will overwhelmingly hit the wealthy. It is not ‘a new tax’ ; but rather Labor is closing a costly loophole ; one which could soon cost as much as  “$11.4 billion over the forward estimates from 2018-19, and removing it could improve the budget bottom line by $59 billion over the medium term.”    Bowen argues that: “More than 92 per cent of taxpayers do not receive a cash refund for excess imputation credits, and won’t be affected at all by this change.”

Labor’s recalibration of the tax system will benefit a lot of Australian families, citizens and workers.  Its press for ‘a living wage’ could also make a huge difference for the working poor: though we have to hope that Shorten will heed the ACTU’s call  for a “10.7% increase – or $72.80 per week.”  Which is what is really necessary.

But at the end of the day refusing to consider raising other taxes limits Labor’s room to move.

To fix Aged Care, Health, Infrastructure, Welfare, Education: a very significant amount of money is needed.   Australia’s GDP is now in the vicinity of  $1.7 Trillion/year. Even a modest 1 per cent increase – aimed largely at those on upper incomes – would mean $17 billion/year to invest in services, infrastructure and social security.  This should be the bare minimum for a Labor Government aspiring to improve the social wage and welfare state ; and provide infrastructure. (from fixing NBN, to paying for roads and public transport to bust congestion)

Over the long term (several terms of government) Labor should be aiming to raise the tax rate by 5 per cent of GDP ; or $85 billion a year in the context of a $1.7 billion economy. (that will have to be adjusted for growth, inflation etc also)   The wealthy should pay their fair share. And corporate tax evasion needs vigorous, tough action. But ‘ordinary taxpayers’ benefit from ‘collective consumption’ and ‘social insurance’ as well. Labor just needs to be brave and articulate, ‘cutting through to the electorate’.  Labor’s come a long way ; but there’s also a long way to go.

As for the Coalition Government: Labor needs to hammer home the line that this is not a Budget for low to middle income earners.  It disproportionately assists the wealthy ; and those on lower incomes will pay through the austerity and inevitable user pays that follows in its wake.