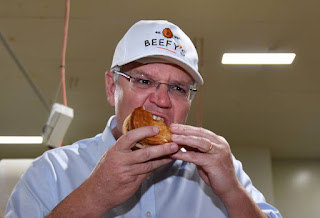 Labor has lost what had been seen as an unlosable election. How could everything go so wrong? How could the polls have got it all so wrong?

Firstly, here, is the United Australia Party vote and Clive Palmer’s money. Regardless of whether he achieves a Senate seat, Palmer is channeling roughly 3.5% of the vote in the form of Liberal preferences.   What can Labor do about ‘big money’ in politics?   Nothing straight away ; but over the long term the rules must be changed so billionaires cannot ‘buy their way into parliament’. Or otherwise 'harvest preferences' for the Conservatives.  Labor needs to run hard on this over the long term.

Secondly, there was the re-invention of Scott Morrison – as ‘Sco-Mo’.  ‘Sco-Mo’ was supposed to be ‘an everyman’s politician’.  With his baseball cap ; at various sporting events ; a dad and a Christian.

This may have been clearly shallow for many of us ; but obviously it gelled with a great number of people. The Liberals chose to focus on ‘the character of Sco-Mo’ and to distract from the dysfunction within ‘the Liberal Team’.  The strategy was reinforced in Newscorp media over months.  Labor failed to smash this invented idea of ‘Sco-Mo the every-man's politician’ when it should have tackled it head on.

Thirdly: the Liberals turned to all the usual prejudices against Labor. The propaganda asserted ‘Labor can’t handle money’ ; and warned of  ‘the Bill Australia can’t afford’.  The fear campaign was not sufficiently interrogated in the media ; and ultimately it worked.  Labor failed to establish that deficits have continued under the Liberals – and much more than necessary because of measures enhancing the incomes of the –already-rich; and that a deficit was in fact necessary under Rudd in order to stimulate the economy and avoid recession.

In fact there was a narrow base to much of Labor’s tax reform.  Measures on franking credits affected less than 5% of the population.  But Labor did not establish this in the public consciousness  either.

Further, there is the melding of neo-liberal Ideology and the legacy of 80s ‘reconciliation politics’.

The Hawke-Keating governments delivered Medicare, superannuation and various tax reforms.  But they also consolidated in the public consciousness that class conflict was ‘bad’.  And it was up to unions to ‘take a hit’ with wage restraint for the sake of the economy ; but without the delivery of anything ‘Nordic’ in return.  The problem was that once the unions traded away a general right to withdraw labour, and conceded to enterprise bargaining – as its position further weakened it had little else to bargain with.  And ‘reconciliation’ was seen as organised labour’s responsibility to be flexible in response to ‘employer needs’.

The ALP started talking about reducing the number of days lost to strikes as a virtue in of itself ; when in fact it was also a signal of a weakening movement.  Where the legitimacy of industrial action itself had been reduced to an impression of ‘disruption, thuggery, and unnecessary inconvenience to the public’.    Here all redistribution is also reduced to ‘the politics of envy’.

The Liberals speak of “a fair go for those who have a go”.  But was Morrison arguing that cleaners, nurses, child care workers, aged care workers, teachers – do not ‘have a go’?  This is the same kind of warped take on ‘meritocracy’ which ‘naturalises’ privilege and inequality.   But Gina Rinehart did not ‘work her way to prosperity’.  And yet inheritance taxation is still stigmatised as a ‘death tax’ ; and this also featured in Liberal disinformation and scare campaigns.

Morrison tried to ‘shame’ Shorten for ‘not looking a man on a $200,000 income in the eye’ that he was increasing his tax by 2 per cent. (!)  Shorten should have responded strongly that the flattening of the tax system had to stop ; and everyone else was paying the price.  But he did not confront Morrison directly on this.  This was a wasted opportunity that let Morrison off the hook in constructing his ‘meritocratic mythology’.

For decades the ALP was also complicit in the politics of ‘small government’.  Breaking that consensus was always going to be difficult after all this time.   As things are reform here has to be slow, deliberate and cautious.  But without such a plan Labor cannot achieve any significant reform agenda.

Also there was the question of Morrison’s alleged Christianity and the case of Israel Folau.  Themes of ‘freedom of religion’ could have been a real sleeper issue which influenced a significant number of votes.  Labor needs to balance freedom of religion with anti-discrimination measures. Much scripture in many faiths contains elements which grate against the grain of modern liberal society.  But effectively repressing the expression of the contents of scripture might simply consolidate a significant portion of ‘the Christian vote’ in the Conservative camp.  There’s a clash of liberties and rights which simply cannot be resolved: it can only be negotiated.  But even accepting religious freedoms, there will be no ‘turning back the clock’ on minority rights when it comes to issues like  equal marriage.   At the same time we cannot make it easy for the Conservatives to 'divide and conquer'.

This is a devastating loss for Labor. It amounts to a victory of fear over hope and vision.  But Labor cannot give in.  It needs to draw tactical and strategic lessons without abandoning its values.  Labor cannot give in on the project of re-structuring the tax mix to pay for social wage and social insurance measures.   Next time Labor needs to look at tax reform in the vicinity of 1% to 1.5% of GDP: but squarely aimed at the top 10% demographic.   And Labor needs to establish that the remainder will not be adversely affected.   With the exception that superannuation tax concessions still need to be tackled ; and may cost the Budget tens of billions into the future if this is not done. And perhaps with the additional exception of a dedicated progressive levy to fund a National Aged Care Insurance Scheme.  The Aged Care Royal Commission should provide momentum.

Labor also needs to establish that a ‘flattening of the tax system’ means that most of us pay proportionately more: not just through the tax system itself ; but also as a consequence of the user pays which ensues.

The coming term will be marked most likely by economic crisis – intensified by the trade war between the US and China.  And by the moral imperative of responding to the Royal Commission on Aged Care.  If the Liberals take Australia into recession Labor needs to punish them on this relentlessly.  And ‘burst the bubble’ of ‘Liberal economic management’.  In addition to pressing hard for a full implementation of Royal Commission recommendations on Aged Care, Labor needs to continue focusing on restoration of funding for the NDIS and Gonski education recommendations.  Next time we need to provide certainty that we will legislate for a higher minimum wage ; and also address the income of low-wage workers more broadly.  (that includes through the social wage)

Most importantly Labor needs to debunk the Liberals’ warped construction of ‘meritocratic Ideology’.   Labor needs to establish that all kinds of people work hard ; and we should not be naturalising privilege.  This is a core Ideological battleground which Labor must contest if it wants to embrace policies involving distributive justice.  And to make sure the public is fully aware of the arguments next time the entire movement needs to begin campaigning on these principles and issues immediately.  We have three to four years and we cannot afford to waste a single day.

Finally there is the question of the labour movement and broader social movements’ response to inevitable Conservative austerity.   Progressive social forces need to prepare for a defensive fight against austerity ; and continue the fight for wage justice at the industrial level.

The danger is that Labor will retreat into a conservative ‘small target’ strategy.  Instead Labor needs to draw tactical and strategic lessons while remaining true to its values.