Lack of Funds amounts to Elder Abuse: But neither Party is Talking about it 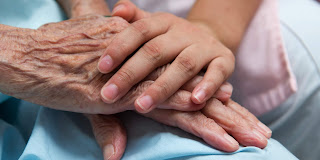 
In a reflection in Saturday’s Age (11/5) Merle Mitchell explained that institutionalization in aged care left her without a home.  Institutionalized care can mean loss of social networks and community.  In her opinion, there was the feeling that death would be a better resolution for everyone.  Fortunately, though, she did not lose contact with all her friends, and that helped preserve her “cognitive capacity”.   She presses the case for a counselor for all residents and for staff. And suggests that if the effort was made to keep residents engaged that may enable stimulating discussions on all manner of issues.   Merle also enjoys extra exercise half an hour a day ; but that is an ‘extra’ that has to be paid for ($50 a day).    Many cannot afford it.  In the end some of the biggest problems are the lack of ratios, and of personal control over everyday life. With ‘institutionalization’ you get up when you’re told to ; you eat when you’re told to ; you go to bed when you’re told to.

Merle’s story is one of an extraordinary number being considered by the Aged Care Royal Commission.  Unless the process is somehow corrupted the Commission will almost certainly advocate for better ratios for nurses and staff. It will consider the quality of food ; the provision of privacy ; the provision of mental stimulation – whether through discussion of politics, philosophy, religion ; or if you prefer - discussion of the football ; and remembrances of years past.  Just sitting people in common rooms to stare at televisions is not the answer!


Better ratios would mean more time to dress and wash in the morning.  It could help ensure residents stay healthy and actually eat their food. Gentle exercise should be provided for everyone capable – regardless of cost. There must be a wide range of books, and increasingly internet access as well.  A nurse on site 24/7 is crucial in the case of emergencies.  And morphine must be made available to the dying.  (I have been told it’s only available in hospitals)  There must be outings for those capable.  And preferably facilities must include gardens where residents can relax and be at peace.  Personal choice must be extended as far as possible.

At home care must also be a viable option and there has been progress ; but some are still left waiting too long for packages. Staying at home in familiar surrounds full of memories is very important.  But again maintaining social engagement is crucial. Including several outings a week ; taxi vouchers ; gatherings with like-minded individuals ; in short – general quality of life.  The support of family is crucial in all this ; but some families neglect their elders (and some lack family as well) , and in such instances communities must step in to provide support and affection. Obviously not everyone can do that work ; only people whose hearts are ‘in the right place’.

A lot has been made of elder abuse recently.  And there are some shocking stories.  But Conservatives prefer to focus on individual instances and deflect attention away from SYSTEMIC ELDER ABUSE in the form of insufficient regulation and funding.  So far in the current election campaign neither side has had anything much to say about Age Care reform, and provision of extra funding.  The initiatives suggested here are crucial to the well-being of our loved ones ; but they come at a cost: probably billions a year.  Meanwhile Conservative PM Scott Morrison focuses on tax cuts for the already well-off and thinks he can hoodwink us with mantras on ‘economic management’.  Those tax cuts will also mean austerity ; some of which will hurt the poor and vulnerable.

Sometimes  Aged Care workers (mainly women) need better training ; and to retain the best workers a Labor government should subsidise Aged Care worker salaries – as it is doing with child care workers. It can be a grueling job ; but it is one of the most important jobs of all to care for the most vulnerable of all. Loved ones we would not forsake for all the world.  Those workers need respect ; and they need support.

Labor is bringing in money from tax reform ; closing loopholes and so on ; but is not yet committed to significant aged care reform.  Beyond already-mooted reforms it is emphasizing its attempt to outbid the Coalition on a Surplus.  But when the Aged Care Royal Commission hands down its findings it must urge Labor to somehow dedicate comparable funds to those made available for the National Disability Insurance Scheme. (NDIS)  (assuming Labor wins the election)  Even if it means imposing a dedicated-purpose, progressively structured levy.  The political parties have treated this issue like a political football for over a decade.   That has to stop ; and we need real action on Aged Care NOW.

Shorten is beginning – tentatively – to ‘break the mold’ – on small government.  The sufferings of the aged ; and their need for love and dignity is too important to again “leave it until next time”. Morrison is a hypocrite ; parading his ’Christian credentials’  while preferring tax cuts to caring for the vulnerable.   But Bill Shorten needs clarity and resolve.  It is an argument he can win.  We’re talking about our loved ones here ; and possibly of our own futures.  Bill Shorten must foreshadow the necessary commitment of resources now ; or he must support an immediate shift of policy on funding, ratios and standards following the Aged Care Royal Commission.   Lack of funds amounts to systemic abuse of our elderly.  Elder abuse cannot be ‘fixed’ without the provision of extra billions every year.