Albanese: Take a Stand on Tax for our Supporters' Sakes 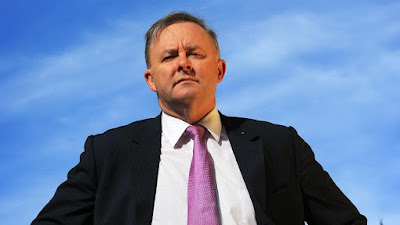 above:  Anthony Albanese must take a stand for Labor Constituents, opposing effectively flatter and lower tax which would end up with austerity and inequality down the track...

A letter to Anthony Albanese:

Abbott blocked good policy ; Now Labor has a right to block sweeping tax cuts that will indirectly hurt millions of its constituents. And many will be very disillusioned or angry if you let phases 2 and 3 pass.

The Government's plans include the following for phases two and three:  (from Treasury)


This represents an effective 'flattening' of the tax scales ; with higher income individuals on effectively lower rates of tax.

It will also cost the Budget $160 billion over 10 years. This when we're likely heading for a recession. It will fuel austerity.  Especially if the government prioritises the surplus even in time of economic downturn.

Finally: remember that the median wage in Australia is only approx $53,000/year. The Conservatives talk about people on $120,000/year as if they're 'battlers'. If we don't stand up and fight only the Conservatives will eventually win with their long term agenda of a flat income tax.

They also want to legislate ahead for the next term of government which is totally unreasonable.

The Conservatives claim a mandate. Yet they won through a fear campaign based on lies ; Clive Palmer's Money ; and preferences from Palmer and One Nation.  And in Opposition under Abbott they never respected Labor’s mandate.

Labor needs to restructure income tax for fairness ; and index the lower brackets to avoid a vicious cycle of bracket creep and regressive tax cuts which flatten the scales.  This must be a priority for Labor upon re-election.

We don't need to capitulate on progressive policy. Labor needs a strategy to nullify the fear and disinformation campaigns.  Capitulation is not a strategy.

Raise progressive taxes by somewhere in the vicinity of 1% to 1.5% of GDP upon retaking government. Exclude lower and middle income earners from higher taxes. Be thorough in this. Point out the moderate scale of the reform ; and explain where the money is going. (eg: Aged Care Social Insurance, Medicare Dental)  If Labor must tax a broader base then consider the Medicare Levy as well. It’s the closest thing in this country to “a popular tax” because of the clear connection with medical services, and the universal coverage most Australians value.

The Coalition is fond of arguing about "great big new  taxes" - even where there are no new taxes; Labor HAS to fight them on this.  Again: Insist on a figure in the vicinity of 1% to 1.5% of GDP in the first term of a new Labor Government.  Point to our low tax rates in Australia compared with the OECD average.    (approx. 27% of GDP compared with approx. 34% of GDP)  Australian tax overall is approximately seven percentage points lower in Australia compared with the OECD average.  That’s a difference of approximately $119 billion Australian dollars a year.

If we give in we get an Americanisation of the discourse which gradually flattens tax scales, and makes meaningful social democratic reform on social wage, social insurance, public infrastructure and welfare impossible.

Take a stand, Albo.  That’s what ordinary Labor members and voters want and expect from you.