Can Labor accommodate an inclusive and open internal debate on Tax and the Social Wage? 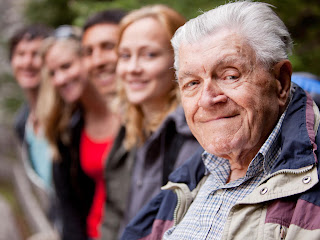 above: The Ageing Population will have severe Budgetary Implications and Labor need to be planning now ; including for the provision of first class Aged Care for all ; now is not the time to capitulate on 'small government'.  Labor must 'go on the front foot' as the Aged Care and Mental Health Royal Commissions pass down their findings

I’ve been copping some criticism for my decision to publicly disagree with the Parliamentary Labor Party’s decision to waive through the Conservative Government’s tax cuts package – which includes some benefits for middle income earners, but nothing for the working poor, and a massive windfall for the rich.  ‘Phase 3’ – which focuses mainly on tax breaks for the rich – will cost $95 billion over only its first five years.

Many reasons have been given for the decision, including Labor’s desire not to be seen to be ‘getting in the way’ of a tax cut for middle income and higher income workers.  The rationale is that we pick our fights at a time and context of our own choosing.   And don’t give the Coalition a bludgeon to beat us with in the meantime.  And some are arguing we could move to rescind the Phase 3 cuts closer to the next election.

This is problematic for a number of reasons. Generally, it’s easier to legislate tax cuts than to repeal them.  Various ‘pragmatists’ in the Party will point to the need to court ‘aspirationals’ (an Ideological construction meant to promote capitulation on distributive justice) and some will ‘get cold feet’ on any rescission as the election approaches.   Even some figures on the Left are arguing in favour of the tax cuts, not just as a tactical imperative, but on the basis they do not see the social wage as  a priority.  Though I’m sure there are many more who understand the place of the social wage in Labor’s mission and identity.  Some are opposing ‘Laborism’ to ‘Social Democracy’ ; but when pressed I doubt these would implement reforms on pattern bargaining, labour market regulation, secondary boycott, and so on.

Also ; Labor’s strategy is demoralising and disorienting for many members and supporters.  Labor 'didn't have the numbers' but 'taking a stand' would have been good for morale ; and would have left less ambiguity where we stand. Though that will be ameliorated should Labor commit to rescinding Phase 3 at a  later date “if it proves to be fiscally irresponsible” and “a barrier to provision of front line services”.  Which we know will be the case.

So can the Party tolerate debate on this issue ; and if so should it be ‘behind closed doors’, or should some of it be public?

Firstly, if most of the Left (and possibly significant parts of the Right) want to see Phase 3 withdrawn at the next election we need a discussion within the Party as to why this is so urgent. There must be grassroots pressure so even ‘pragmatic’ MPs understand it’s what the Party expects and demands.  And activists and other members must be educated as to the consequences of the policy if it is not withdrawn.  Debate within policy committees and so on is not good enough as it does not engage the majority of members.   Public debate also gives cause for supporters to ‘take heart’ that there are significant forces in the Party fighting to rescind the appalling Phase 3 tax cuts later on. We need to be arguing that we will review the policy next election not only because it is fiscally irresponsible ; but also the distributional impacts, and impact on services.

And if Party figures think they cannot risk disunity ‘at the top’ ; surely at the least they can see the good of ongoing and permanent debate ‘at the grassroots’. And when the Coalition uses the old ‘class warfare’ label we need to respond that it is they who are waging class warfare ; imposing a greater proportional tax burden on  lower and middle income Australians, cutting services,  removing penalty rates, seeking to smash unions, degrade conditions and so on.

There’s also a problem that if the Coalition gets away with this tactic once, they will try it again.  That is: combining policy which is of some interest to workers in the short term with policies which will be very harmful to most over the long term with damage to the social wage, social insurance and collective consumption, welfare state, and funds for public infrastructure.  And trying to pass them 'as a package deal'.

The  Aged Care and Mental Health Royal Commissions are developing their findings even as this is written.  Action on mental health and aged care will require resources that simply won’t be there if the Coalition gets its way.  We’re talking action on a similar scale to the NDIS. (National Disability Insurance Scheme)   The ageing population makes action there especially urgent.

Labor’s strategy must be to demand action on these fronts, in the full knowledge that this puts fiscal pressure on the Conservatives to pull back on tax cuts.  This is not necessarily because of some cynical partisanship or desire to ‘wreck’, but because the Aged and the mentally ill desperately require our support. More hospital beds, better pensions, psychological counselling and community support.  Enshrined ratios (nurses and aged care workers) in Aged Care and the funds to make that possible.  Better training – including dementia training – and better wages and conditions for Aged Care staff.   Resources for ‘quality of life’ ; private rooms, quality food, access to internet, facilitated discussions and games , a life that is worth living – and more than sitting people down in front of televisions all day.  Also more money for ‘ageing in place’ programs ; ensuring everyone who needs such a package can receive support quickly ; without onerous waiting lists that currently can go on over a year.  And on the way begin winding back regressive user-pays.

In the meantime Labor must resist any austerity ‘brought forward’ to accommodate the Coalition’s tax cuts.

The bottom line is that Labor needs a debate which keeps distributive justice, progressive tax, social wage provision – front and centre of the Party’s agenda.  Over the medium term we need to be moving towards the OECD average tax to GDP ratio.

Labor also has to head off the so called ‘ensuring integrity’ anti-unions laws ; and should be engaging the crossbenches on this now.  We also need to prioritise the Senate for the next election.  If the anti-union legislation passes the industrial wing needs to be prepared for a fight to render the legislation ‘the dead letter of the law’.

Many Labor activists are now ‘falling into line’ because of the idea that ‘disunity is death’.  And hence a desire from some to enforce conformity. The fight to oppose Phase Three outright from the outset has been lost.  Many are bitter, but we need to plan ahead for the future. The next debate is whether we press for extended services on aged care and mental health we know are incompatible with the Coalition’s vision of ‘ever smaller government’.  And following that: whether we are willing to rescind Phase Three after the next election ; and maybe even modestly raise taxes by around 1% to 1.5% of GDP on top of that to fund an expansion of the social wage which ‘takes us forwards’, not just a ‘rear-guard action’.

Negative Gearing reform and Franking Credits may be off the agenda for now, but the reality is we failed to sell our policies.  Perhaps we should have imposed means tests in places so our policies did not disadvantage any genuine ‘battlers’.  Alternative policies could include a very big commitment on public housing.  As well as a restructuring of income tax, and imposition of indexation at the lower brackets.  Also a progressive increase of the Medicare Levy to fund dental and mental health; and a National Aged Care Insurance Levy to fund  Aged Care reform.  We need a vision which 'takes vulnerable and working Australians forwards'.  Already-progressive forces need to ‘plan ahead’ for the next National Conference.

The election was close and we should not succumb to despair. With reform re: ‘big money in politics’ , and full preparedness for any future Conservative ‘scare campaigns’ we should be able to go into the next election ‘on the front foot’.