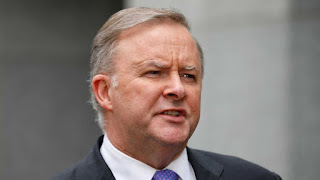 above:Anthony Albanese has called for more funds for Child Care and Social Housing

The 2020 Federal Budget projects a deficit of some $213 billion – a far cry from the previously projected surplus.   An already sluggish economy – hit now by Covid-induced economic collapse – left no option but massive stimulus – lest the nation sink into a Depression.

In a way it is encouraging that the government has thrown away the book on neo-liberal orthodoxy to some extent.  A contractionary budget would have been disastrous.  A notable amount of the stimulus (about $6 billion) comprises wage subsidies aimed at the young – with the aim of supporting some 450,000 jobs. The plight of the older unemployed – thrown onto the Jobseeker scrapheap – is another question.   In the largest  single measure over $26 billion in tax breaks will be delivered to business to write off the value of new investment by June 2022.  There will also be a $4.9 billion “loss carry-back scheme” enabling businesses  “to claim refunds or offsets on taxes in previous years.”  Importantly, the third round of tax cuts – aimed at high income earners – has not been brought forward  - in a win for Labor and the Greens.  But the business sweeteners are not consistently tied to job creation and job retention – so for all that money there are no guarantees for workers.  According to ACTU President, Michelle O’Neil, the government also projects zero wage growth even if there is economic growth in the coming years.

In Aged Care, $1.6 billion will provide 23,000 home care packages. But this is below demand, and there are no big plans to reform residential care.  Perhaps this will come with the final findings of the  Aged Care Royal Commission and the next election: but the need is urgent and ought not be put off.  In fact it is dubious the Conservatives will find the money for comprehensive Aged Care reform: Home Care and Residential packages to meet demand ; with quotas for Aged Care Workers and registered nurses, a winding back of user pays, exercise and GP visits for all residents, and an emphasis on quality of life. It will be up to Labor and the Greens to put up a fight, though disappointingly Labor has known about these problems for over a decade, and is only making the right noises now with the focus provided by the Royal Commission.  We are talking many billions of dollars annually to make a difference over the long term.

‘The Age’ reports that “about 11.5 million workers will get up to $2745 more in their pay packets this financial year”.  Though the raising of the threshold of 32.5 per cent to $120,000 from $90,000 is arguably badly targeted.  And support for pensioners and the unemployed is insufficient, with a total of $500 in payments to Aged Pensioners meant to bring relief and fuel spending.  More for those on  low incomes and welfare would have a greater stimulatory effect, and would contribute to fairness.  On the other hand the low income tax offset will rise from $445 to $700 in a modest but welcome measure.

Importantly, of the new spending measures only $6.7 billion is going to the states for new infrastructure.   Including other infrastructure measures the figure is closer to $10 billlion extra over ten years.  The government’s main emphasis is in providing support and incentives to ‘kickstart’ business as opposed to measures directly supporting consumption at the low and middle ends ; although increased business confidence would support jobs.   The Budget measures emphasise the ‘supply side’ but neglects the ‘demand side’ when it comes to low income earners, the unemployed and pensioners.  The opportunity to permanently raise Jobseeker appears to have been neglected, and many jobs will be lost with the premature withdrawal of Jobkeeper.

Of most concern, stimulus is not a ‘black hole’. Getting people spending and back to work is part of a ‘virtuous cycle’ which can restore growth and rejuvenate the government’s balance sheet.  With record low interest rates the time has never been better for investment, and the Government could have done more here.

The economy’s pre-existing weaknesses have not helped ; but a Labor Government could not have avoided a Covid recession.  As Labor has argued it will be putting the case for ‘better bang for our buck’ in the stimulus. This should mean more emphasis on those on low incomes and welfare, and providing support where it will grow spending and investment in jobs most vigorously.  Too many businesses will be pocketing these 'sweeteners' without necessarily creating jobs.

Modern Monetary Theory supposes government can issue currency to ensure a ‘full employment guarantee’.  Such stimulus is part of the picture, but can be limited by inflation and currency devaluation.  Though inflation seems unlikely in the current environment.   Redistribution can’t be done properly and fairly without tax ; but MMT has something to contribute to this debate.  The government's projections on unemployment are nowhere near ambitious enough.

If Labor was in government this kind of stimulus would be derided as an ‘irresponsible’ ‘cash splash’.   Consensus that stimulus is part of the way forward in times of economic weakness is at least a good thing in itself.  It sees Conservative arguments against the Rudd stimulus of the Global Financial Crisis (GFC) blown metaphorically out of the water.   Labor governments of the future will be able to point to the current effective consensus on SOME form of stimulus to help justify their own efforts when governing in times of downturn or stagnation.  Which will inevitably come as part of the capitalist cycle. But this government's emphasis on the 'supply side' of the equation is nowhere near discriminatory enough.