Wage Justice can be Delivered While Also Containing Inflation 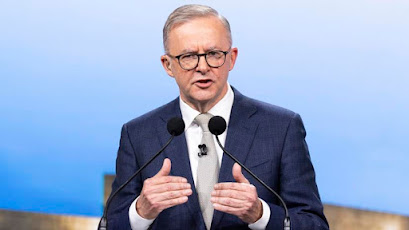 above: Anthony Albanese wants Wages to at least Keep Pace with Inflation

Anthony Albanese stands besieged for suggesting a minimum wage increase which keeps pace with inflation.  Specifically, that is 5.1%   This would raise full time wages by just $39.40 a week – less than a dollar an hour.  Businesses are claiming such a move would drive them to the wall and fuel inflation.  But since the 1970s labour’s share of the economy has fallen by over 10 per cent, from 58.4 per cent to 47.1 per cent: or $16,800 a year for the average worker.  Especially ; why is it that the Conservatives believe it is the job of the country’s lowest paid to pay the price for inflation when many businesses are experiencing spiralling profits?  If wages cannot even keep pace with inflation, at what point can the structural inequities in the country’s labour market be addressed?

It is true that higher wages may have some impact on inflation.  There are areas where increased costs will at least in part be passed on to consumers. But this is a false economy based on the exploitation of the poorest workers.  It suggests a policy of drifting towards a US style labour market where there is a large class of working poor who can barely keep their heads above water.  Fear of falling into the working poor disciplines the so-called ‘middle class’.  And threat of homelessness and destitution disciplines the working poor themselves. This is the trajectory the Conservatives would take us down.

But arguably in the name of fairness there must be a ‘structural correction’ for low-paid workers at some time or another.  This may have a small, temporary impact on inflation ; but it is necessary if the most exploited are to survive in dignity and make ends meet.  The prosperity of high and middle income earners cannot be based upon the exploitation of a class of working poor.

At the end of the day an even larger correction is justified. That is: to restore labour’s share of the economy, and the grow the social wage and welfare state to support all Australians.  This is necessary as some problems are best faced collectively ; and also the labour market will never deliver full distributive justice to all workers. All workers deserve support ; including those who find it hard to organise ; or who face structural constraints to wage increases. Because of the way the Australian economy is now structured all this is no easy task.  The process could begin with claims for collective capital share in lieu of greatly increased wage levels.  This is a process that could be led by unions ; who could target areas that are not overly susceptible to capital flight.  Also low-paid workers could be assisted by a recission of secondary boycott bans where secondary boycotts are taken by well-organised workers in support of workers with little bargaining power ; and where such action can be shown to be being taken in good faith.

Albanese has promised action on wages.  But even committing to matching inflation does not compensate for falling wages over the course of the last decade and more.  Though Labor’s housing policy – which involves the government taking up to 40 per cent equity in families’ houses – will put home ownership within reach for many who may otherwise have felt the situation hopeless.   As interest rates increase the price of properties will probably fall – a ‘double edged sword’ that – while perhaps necessary – will leave many Australians looking poorer on paper.

One area where Albanese has been unequivocal has been his support for a 25 per cent rise in the wages of Aged Care workers.  This is one of many areas requiring a ‘structural correction’ ; both to deliver wage justice ; and also to improve care, and retain workers in the industry.  Given the taxing and skilled nature of the work there should be a minimum wage of at least $30/hour here. This is more than the existing claim.

In the final analysis the economy makes so much wealth ; and the question is one of distribution, as well as higher productivity ; and industry policy encouraging high wage industries. Increasing the size of the cake is good – but does not solve all problems. At some point we need to confront the question of who gets what share of the cake ; and this will require redistribution. Sometimes it’s possible to have ‘win-win’ – but not always.  We cannot become a US style economy where workers are disciplined by fear of destitution ; and where the living standards of a so-called ‘middle-class’ depend on the exploitation of the working poor.