Labor in Government provides Opportunities that Should not be Wasted 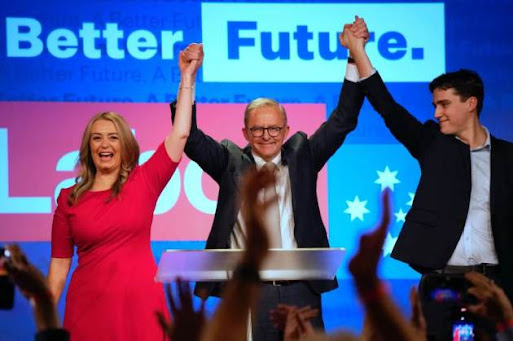 In the run-up to the Federal Election many progressives tried to justify Labor’s small target strategy by arguing that Labor would get things done once in government. But that too much detail beforehand would confuse and overwhelm people.  Now the day has come.  Labor has enjoyed a strong victory. And it’s time to deliver.

The Greens have argued for Medicare Dental ; but Labor could make the policy its own while winning broad and ongoing Greens support for the remainder of the term.  The squeeze on the cost of Gas also demands subsidies in favour of those on low incomes and welfare.  While an increase in the supply of public housing could improve housing affordability. Pressure on the NDIS should be lifted with additional funding ; as should pressure on our hospitals.  Waiting lists have exploded with Covid ; and action is urgently required. Accessibility and affordability in Higher Education should also be addressed with lower fees and an increase in repayment schedules clearly above the average wage.  Tied grants should be provided to the states to fund an increase in teacher numbers ; while a National Curriculum should be designed which promotes active, informed and critical citizenship.   This includes understanding of political processes and opportunities for public sphere participation ; as well as sophisticated ideological literacy. Finally, promises on Aged Care should be implemented. Albanese has promised an increase in care personal attention hours for residents ; but to implement this we need Aged Care Worker Ratios. Winning Government is not the end of the journey ; it is only the beginning.

We also need a sense of scale when talking about funding for reform.  There is often a sense of panic and alarm when talking about policies which go into the billions.   How often do we hear that ‘we cannot throw money at problems’ or that funding policies is dismissed as a ‘cash splash’.  (and hence ‘irresponsible’)  But let’s be clear ; the economy is valued at some $1.7 Trillion a year. That’s ONE THOUSAND AND SEVEN HUNDRED BILLION.  Fear to pursue truly ambitious policy leads to stagnation.  And failure to commit money translates as a failure to commit resources.  Viewed thus, any public policy agenda will fail without sufficient resourcing.  Labor needs to be thinking about what is reasonable in terms of short to long term plans to expand the social wage and welfare state, as well as other programs to provide infrastructure and skill development, and to improve public broadcasting.  We need to develop popular understanding of concepts such as ‘collective consumption’ ; and how the social wage can provide better value for money for workers, consumers, tax-payers.  $17 billion is one per cent of GDP. And over several terms of Government it is a reasonable objective to aim to broaden the social wage and welfare state by 5 per cent of GDP.

This is not an arbitrary figure, but an estimate of what is necessary for ambitious reform.  Again, this could fund public housing, education and health, aged care, welfare and unemployment insurance reform, infrastructure (including renewable energy, rail transport and fiber to the home National Broadband Netowork (NBN) ), and programs to secure guaranteed job placement and experience for the disabled.  Disability Pensions should be reformed also, to increase the scope to supplement income with part-time or casual work, and to take away perverse incentives to avoid intimate relationships.  (eg: measures which radically reduce pension payments to individuals in relationships and marriages)   Further ; local government should be supported so that suburbs who suffer from undeveloped social infrastructure like parks and gardens, sporting and fitness infrastructure, libraries and so on – are able to deliver better quality of life to working class families.

Meanwhile ; over the long term there should be plans to resocialise energy and water.  And to reintroduce public-owned competitors in markets like financial services and insurance: to counter collusion and support consumers by providing competition from government business enterprises on a not-for-profit footing.

Finally, the labour market demands structural reform to prevent the entrenchment of a class of working poor Australians. This may have a once-off inflationary effect ; but redistribution one way or another is necessary to deliver wage justice.   We need to address the distribution of the economic pie between capital and labour ; but also between labourers themselves as well.  Other innovative policies could include financial support and financial counselling for people planning on developing co-operative enterprise. (on either a large or small scale)  If increases in minimum wages will not eventuate without direct intervention, then there should be direct intervention.  This should be undertaken where the current framework of Fair Work Australia fails to deliver.  Allowing secondary boycotts 'in good faith' could also enable the industrially strong to assist the 'industrially weak' in achieving better outcomes for historically low-paid workers.

It's not good enough to put ambitious reforms off until a second term. Policies like Medicare took years to become entrenched ; to the point where any effective frontal assault against basic socialised medicine became impossible.  Here, also, once-introduced and accepted as part of the ‘socialised medicine landscape’, Medicare Dental would be very difficult to dismantle. The establishment of  a Labor Government provides the opportunity to introduce life-changing reforms. It is an opportunity that should not be wasted.