Remembering Mikhail Gorbachev and his Legacy 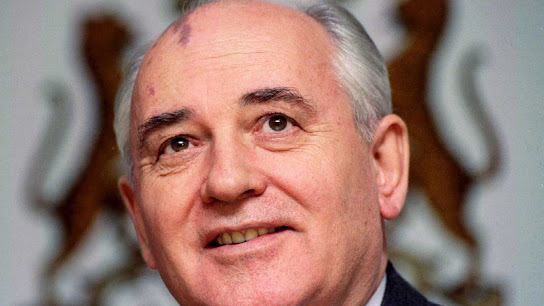 Mikhail Gorbachev has passed away at the age of 91.  In the West Gorbachev is still held in high esteem for ‘ending the Cold War’.    His policies of Glasnost (‘openness’) and Perestroika (‘Restructuring’) opened the way for reform, but also perhaps sadly the disintegration that then followed, with the effective theft of peoples’ assets and industry that was later to occur under Boris Yeltsin.  The world of (capitalist) ‘oligarchs’ that has followed the collapse cannot seriously be considered as in any way better than the former state of affairs ; and liberties did not last long in the former USSR following Gorbachev’s fall from power.  Though it’s interesting that we do not call our own billionaires ‘oligarchs’ in the West ; and especially in the United States where corporate lobbyists have unmatched power.

Gorbachev understood that the USSR could not compete militarily with the West while it failed to compete economically.  In the 80s military competition had accelerated and there was a widespread fear of nuclear war which we have now forgotten.  Gorbachev agitated for peace at the same time as Reagan pursued his ‘Star Wars’ plan, which aimed to make a nuclear war ‘winnable’.   At the same time there was repression, Terror and mass murder closer to home, in countries like Guatemala, Nicaragua and El Salvador.  And yet the United States outpaced the East largely because of a ruthless exploitation of its economic periphery. (eg: including Central and South America)  In many ways Gorbachev heralded the kind of reform democratic socialists had long been hoping for, legitimising the USSR for many, but also helping to precipitate a collapse.  In retrospect it would have been better if the USSR had not collapsed.  But decades of Stalinism meant there was little in the way of a mobilised and independent civil society.  The consequence was that when the collapse occurred there was little resistance. In light of all this it would have been better if Gorbachev had mobilised civil society in defence of democratic socialism from the outset.

Gorbachev’s passing reminds us of missed opportunities, and begs the question of whether there was a better way forward.  Today there is war in Ukraine ; and the Russian Government entertains ideas of an Imperial restoration.  Russia may find a place as an important trading partner of China, but cannot really hope to restore ‘former glory’ when opposed by almost the entirety of Europe ; and the US.  Also the rupturing of Russia’s trade ties with Europe is harming both sides immensely. Though Russia’s still-massive nuclear arsenal deters uncontrolled escalation.

In later years Gorbachev commonly referred to himself as a Social Democrat ; and tried to establish a social-democratic party in Russia.  On the other hand, arguably the USSR was still ahead of Western Social Democracy on many fronts prior to its collapse.  Mainly in regard to the spread of socialised industry.  Maybe Gorbachev was trying to move with the times, and promote the best possible outcome available at the time. Though his efforts to promote social democracy in the Russian Federation largely met with failure.  In some ways China demonstrates how in certain respects compromise with capitalism can help an ostensibly socialist state to economically compete with the West. Though this could also lead to a crisis of legitimacy and identity.

Perhaps attempts to consolidate a democratic USSR might have failed given the influence of various nationalisms, but now we will never know.  In the mid to late 1980s Mikhail Gorbachev represented the best hope for peace, détente and avoiding nuclear war.  With his passing we should also consider the world that ‘might have been’ ; and mourn the ultimate failure of Gorbachev’s reforms ; with capitalist restoration and the rise of an Imperial Russian State.